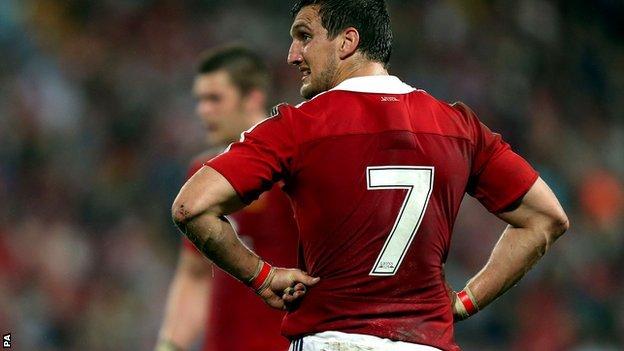 British and Irish Lions coach Warren Gatland has warned he will omit Sam Warburton from his Test side if he feels his captain is not playing well.

The Welsh open-side leads the tourists against New South Wales Waratahs on Saturday in only his second start.

With Justin Tipuric and Sean O'Brien in form, Warburton needs a strong outing to dispel questions about his place.

"I have been 100% consistent from day one. It is about picking the best players," said Gatland.

"The more game time I have the better I tend to play. There is still a lot to prove and a couple of games to play"

"I haven't changed that tune, and Sam is well aware of that. I thought he had a good blow-out last week against the Reds, he got a couple of good turnovers, and we will see what happens on Saturday."

The side to face the Waratahs has the look of a shadow Test team at half-back and in most areas of the pack, with flankers Warburton and Tom Croft paired together for the first time alongside number eight Jamie Heaslip.

The likes of lock Paul O'Connell (78 minutes played), prop Adam Jones (71), Croft (71), and Warburton (74), who missed the first two games because of a knee problem, have been used sparingly until now, perhaps with the rigours of a three-Test series in mind.

But Gatland insists the back row will cause him considerable angst when finalising the side for the first Test after next Tuesday's game against ACT Brumbies.

"We have far from made up our mind on the loose forward options," he said. "There are a huge amount of combinations, they are all fit and have all done well. That is going to be one of the headaches and the next couple of games will determine that [selection].

"The performance on Saturday is important for Sam, and Jamie [Heaslip] and Tom [Croft] as well. You look at Sean O'Brien's carrying the other night, we know he can play seven as well, then you look at the talent and ability Tom brings and then there is the devastation defensively and tightness Dan Lydiate can bring. The two eights [Heaslip and Toby Faletau] are different types of players as well. It is going to be a long night making that final decision."

While Tipuric shone against both the Barbarians and the Combined Country XV, neither provided the level of breakdown threat that the Wallabies will bring, while Warburton's tour debut - his first match in seven weeks - came in by far the Lions' toughest game against Queensland Reds.

"The more game time I have the better I tend to play, and the more I pick up the feel for the contact area and the speed of the game," said the Lions skipper.

"Last weekend was a good run-out for the lungs and I was obviously very familiar playing with Dan [Lydiate] and Toby [Faletau], but I am looking forward to playing with Tom and Jamie now.

"Tom has been awesome at line-out time in training, and Jamie has been great in attack as a ball-carrier. You want to come on Lions tours to play with different combinations but no-one is reading anything into this selection. There is still a lot to prove and a couple of games to play."

Most minutes played in four games

Meanwhile, Gatland faces an anxious wait to see if he will have some frontline backs available to face the Wallabies in Brisbane, with injury concerns over George North (hamstring), Brian O'Driscoll (groin) and Manu Tuilagi (shoulder).

North is receiving treatment after being taken off at half-time in midweek with tightness in his hamstring, having played 180 minutes of rugby in the space of seven days. "We hope he is going to be in contention for next week," Gatland said.

O'Driscoll's recovery will be managed carefully after he "woke up a little sore" from doing the splits in the final moments of Tuesday's win in Newcastle, while Tuilagi is said to be "making good progress" from the shoulder 'stinger' he suffered against Queensland Reds.

Rob Kearney - set for his first action from the bench on Saturday - has yet to prove his match fitness after missing the first four games of the tour, while Tommy Bowe's hand injury is set to keep him out of contention until the second Test.

Gatland indicated he will need players to prove their fitness by early next week so they can be fully involved in Test preparations.

"I think there are one or two that are a little bit sore that may next week be out of contention because they won't have been fit enough early enough in the week," he said.

With only 16 backs in his original squad of 37, Kearney's delayed entry and Tommy Bowe's hand injury has put a greater strain on the other back-three players. Alex Cuthbert - on his return from an 11-week lay-off - and Stuart Hogg have both played three full matches in the space of 11 days.

"Even from four years ago there has been a big step up in the physicality of the game, so when you look at players being able to handle two games in a week, it is tough," Gatland added.

"We need them to be fit at the end of the tour. If I was writing a report, I would probably say does the squad need to be bigger?"

With North now a cause for concern, wing Simon Zebo - freshly arrived from Ireland's tour of the United States - could propel himself into first Test contention with a strong debut on Saturday.

"He has got a personality that will flourish within the squad," Gatland added. "He is in a no-lose situation. He can just go out and enjoy it, and if he plays well, there is an opportunity for him."