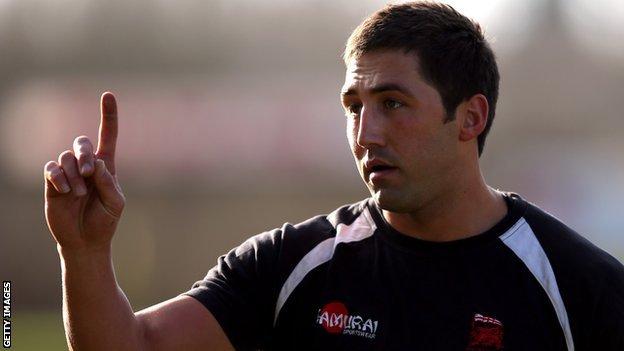 The West Country side will be 31-year-old Henson's fifth club in three years.

And the Wales international has hit the headlines for off-field misdemeanours, as well as appearances on reality television programmes.

We're excited and we're convinced he can offer something quite special

"I think Gavin is a much more settled and mature person than that image we have in our heads," Blofeld told BBC Radio Bristol.

"The last thing he did in the media was about two years ago. He's not interested in any of that, he just wants to play rugby."

Henson, capped 33 times by his country, made his name at club level with Ospreys and helped guide Wales to Grand Slams in 2005 and 2008.

After struggling with a persistent ankle injury, Henson took unpaid leave from the Pro 12 club and became involved in television projects - including Strictly Come Dancing and 71 Degrees North.

He returned to rugby with Saracens in 2010 but was released after only four months, and spells with Toulon and Cardiff Blues were marred by disciplinary issues.

Former Ospreys boss Lyn Jones signed Henson at his new club, London Welsh, in August 2012 but the utility back was hampered by injury throughout the season, in which he made seven Premiership appearances.

Following Welsh's relegation, Henson agreed a deal with Bath for the 2013-14 Premiership campaign, and Blofeld is unfazed by the player's reputation.

"There's been a lot of due diligence which has gone into this deal. We looked at him and analysed him last year and he played extremely well.

"We're excited and we're convinced he can offer something quite special.

"There's always a slight risk but I think it's a huge opportunity. He's a very mature and experienced player and I think he can add another dimension to the game."

Henson has not played at international level since 2011, and Blofeld believes Bath can help him secure a recall.

"I think Gavin's still got a lot to offer," he added.

"I think he's keen to get back into the Welsh squad and being just across the bridge I hope it puts him back on the radar.

"He knows the clock is ticking and he wants to play at the highest level again. He sees it as a fabulous opportunity."