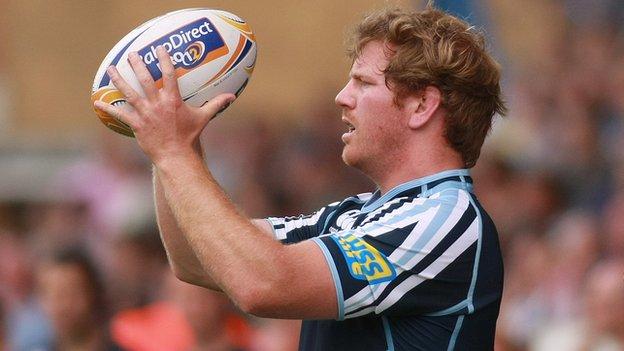 Hooker Andi Kyriacou has joined Cardiff Blues's coaching team after being forced to retire by injury.

Kyriacou in 2012 from Ulster, but he suffered a prolapsed disc early last season.

Surgery in December failed to cure the 30-year-old's problem.

"It is really frustrating as I came to the Blues with the intention of working to establish myself as a regular first-team player and wanted to make a real impression," said Kyriacou.

"So it's disappointing my injury has stopped me from doing this."

The former Sale, Leeds, Saracens and Munster player was called into the Ireland A squad in 2009 having won England Under-21 honours earlier in his career.

"I've been studying part-time at Manchester Metropolitan University for a degree in sport science as I wanted to develop a career in coaching, so it's come about sooner than I expected," he said.

"This is a great opportunity for me and I am looking forward to working with Phil (Davies, director of rugby) and the coaching team.

"I will be concentrating on the scrimmaging area, working closely with Phil with the line-outs and position specific skills with the hookers."

The Blues have recruited former Wales captain Matthew Rees from the Scarlets to fill a hooking berth ahead of the 2013-14 season.