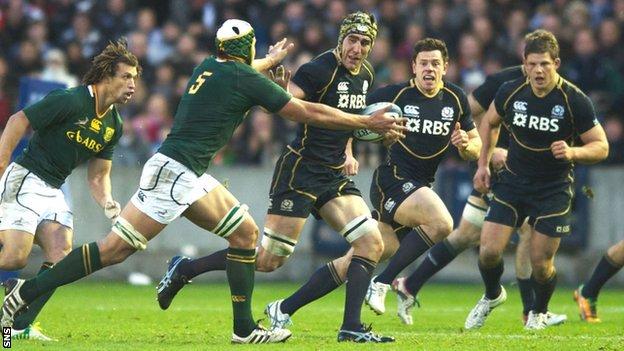 BBC Sport and Scottish Rugby have struck a new deal to cover Scotland's autumn internationals live across TV, radio and online in 2014 and 2016.

The broadcaster is already contracted to cover Scotland's Tests this autumn.

"I'm delighted that the BBC will continue to be on board with us during our Autumn tests through until 2016."

And Dodson said the exclusive deal "enables us to showcase Scotland international matches at Murrayfield to a wide audience throughout the UK and is appreciated by supporters."

He continued: "I think it just goes to show how important our relationship is with the BBC around the national team.

"I think it's a good deal for both of us and we are thrilled to have signed it.

"We are trying to bring more women and children back to the game and widen the whole appeal.

"Over 500,000 people have been through the gates of Murrayfield to watch games and that's a record."

Barbara Slater, the director of BBC Sport, said: "We're very pleased to be continuing our valued relationship with Scottish Rugby.

"The autumn international matches are an important part of our rugby union output and are very popular with audiences across BBC TV, radio and online.

"These are big internationals against some of the most powerful rugby nations and so a crucial part of the season, ahead of the Six Nations which is always hugely anticipated by fans across the UK."

This autumn, Scotland's Test against Japan on 9 November will be shown on BBC Scotland and via the red button in the rest of the UK.