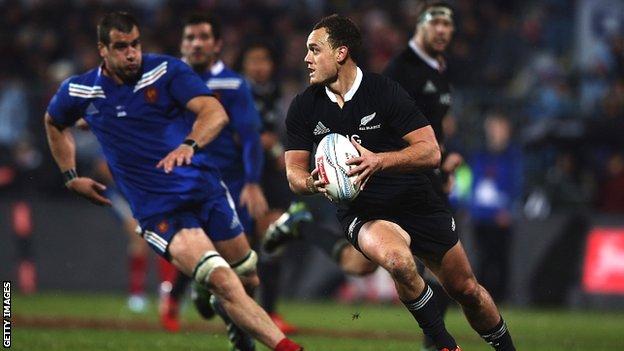 Fly-half Aaron Cruden added 15 points with the boot as the All Blacks ran out 30-0 winners in Christchurch.

They won the first match 23-13 in Auckland last week and the final encounter is in New Plymouth next week.

All Blacks captain Kieran Read said: "We're extremely happy. When we got opportunities we really made them pay."

"Unfortunately we couldn't score any points tonight. They played very well with great defence. There's one Test left so we're going to do the maximum to win."

His side got on the board when Ma'a Nonu's deft kick behind the French defence allowed Savea to record his 13th Test try.

France fly-half Frederic Michalak had two opportunities to respond but failed with a drop-goal and missed a penalty soon after.

New Zealand went into the break 10-0 up but found themselves desperately defending their line at the start of the second half.

After some 20 phases, the French swung the ball back to Michalak for a drop-goal, only for Sam Cane to charge the ball down.

The All Blacks were quickly on the front foot, with Savea switching wings to draw the last defender and put Smith away.