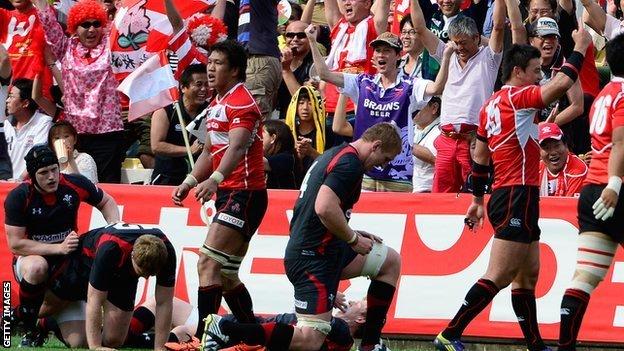 "Arrogance" led to Wales' historic according to JJ Williams, star of the 1970s Golden Era.

The ex-British and Irish Lions wing said Wales "had it coming" after a side shorn of 15 current Lions went to Japan without the experienced Ryan Jones, James Hook and Paul James.

"It's a little bit of arrogance to take such a weak side out there," he said.

"I mean, some of these boys have only played one or two or half a dozen provincial games in Wales."

With Wales coach Warren Gatland in charge of the Lions and his 2012-13 stand-in Rob Howley alongside him as an attack coach in Australia, forwards coach Robin McBryde took charge of the two-Test trip to Japan.

But Eddie Jones's Japan earned their first Test win over a tier-one nation by beating Wales in Saturday's second Test.

In addition to the absences of Ospreys' Jones, Perpignan's Hook and Bath's James, McBryde also chose not to ask former Wales captain and 2009 Lions hooker Matthew Rees to tour.

Jones was also a Lion in 2005 in New Zealand while Hook and Byrne toured South Africa with the 2009 Lions.

However, McBryde chose to take to Japan and following their defeat in Tokyo.

"I made the decisions, I backed this group of young men," McBryde said.

"We've fallen short but hopefully the experience these young men will have gained will put them in good stead."

But Williams, who won two Grand Slams in his 30 caps for Wales and also made seven Lions Test appearances on tours to South Africa in 1974 and New Zealand in 1977, took issue with McBryde's view - and with the style of Wales' play in Japan.

"To throw them into a Test match in somewhere like Japan where it's really hot and they are improving, it was always going to happen," he told The Back Page.

"But what's most of all disappointing is the way we've played over the two games. We've hardly shown any excitement at all.

"We've had plenty of possession but all we've done is pass the ball across the field with no flair or imagination at all. And we want a bit more than that because it's only Japan, after all."

And Williams said the performances by Wales' inexperienced tourists offered an ominous glimpse of the country's next generation.

"There's hardly a player there where you say 'well that boy's going to come through' and set Wales alive in the next few years. We didn't see that at all on this tour," he said.

"So I think the way we're coaching them has to be asked questions [of]."

"We haven't got enough players at the top, really.

"We know we've got an outstanding international team at the moment, but I would expect these professional players to step up to the mark better than they did in the last two weeks."