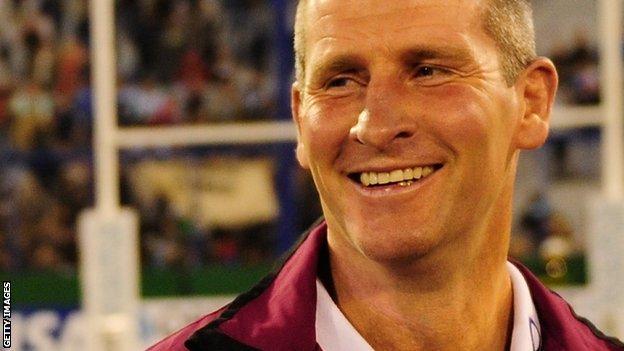 Lancaster's side beat the Barbarians and a South American select XI before a 2-0 series victory over Argentina.

"One of our goals was to win all four games on tour. Objective one achieved," said Lancaster.

"Objective two was to develop other options and look at increasing our selection decisions, which has also been achieved."

England beat Argentina 51-26 in the second Test on Saturday to claim a first away series win against the Pumas for 32 years.

The team achieved the feat without many of their main stars, who are either with the British and Irish Lions on a tour of Australia or being rested.

"In terms of our evolution, this tour has been critical," added Lancaster.

"Some of the young players have gained a huge amount of experience coming on this tour and we have developed new leaders.

"We can look forward to the autumn internationals having won seven of the last eight games."

Christian Wade and Billy Twelvetrees both impressed in England's first Test win against Argentina before being called up by the Lions as injury cover.

Meanwhile, Marland Yarde, Jonny May, Kyle Eastmond and Matt Kvesic have also caught the eye with their performances.

"I am delighted to get the series victory. We had not achieved that before [with a clean sweep]," said Lancaster.

"Credit to Argentina. They improved this week and put us under a lot of pressure so it is even more pleasing to have scored 50 points."