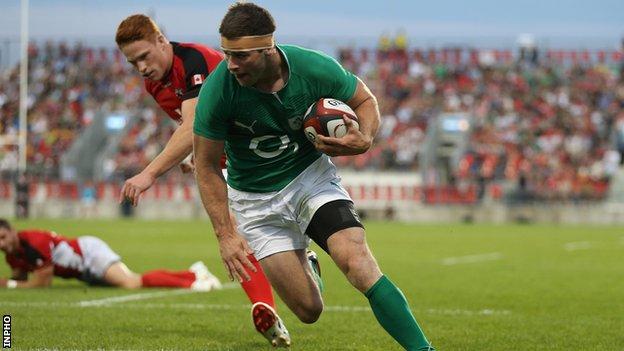 McFadden played a part in Andrew Trimble's opening try, before crossing for three of his own.

"Fergus is one of those players you want to have around your team. What he brings to a team in terms of energy and enthusiasm is sensational," said Kiss.

"If he doesn't get selected he is still the same person. He has an uncanny ability to score tries at international level."

Ireland blooded six new caps on their two-match tour, including Munster flanker Tommy O'Donnell, who got the sixth try in Toronto.

"Without a doubt we found out a little about ourselves as players," added Kiss.

"From a coaching perspective it was certainly encouraging on a lot of fronts.

"Sometimes the perception is you can come and get these tier two nations and run it away easily but they were both tough affairs.

"Tonight I think it was the 54th minute and it was 14-12. We had to find something, keep our composure and again there was fantastic leadership through Peter O'Mahony.

"It pulled us through to a place where we could have the intent to attack as much as we can. And that ended up getting the tries for us."