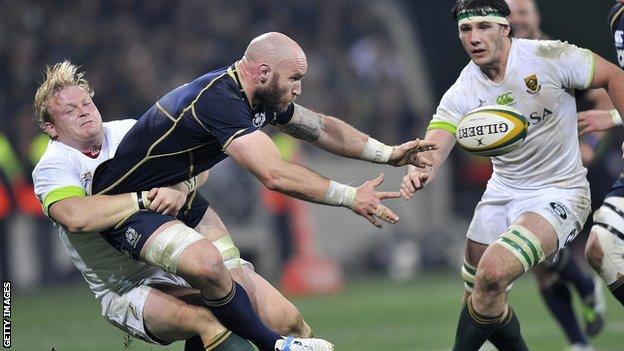 Al Strokosch was pleased with Scotland's improvements against South Africa but knows the tenacity shown in Nelspruit must be maintained.

The blindside flanker played a key role in a strong defensive display that had the home side in trouble until late in a match the Springboks won 30-17.

"We put our bodies on the line," Strokosch told BBC Scotland. "The physicality was there.

"But we have to repeat that good work every time we play and get better."

Scotland led 17-6 in the second half thanks to tries from centres Matt Scott and Alex Dunbar but the hosts finished strongly, albeit with an advantage in personnel, following Jim Hamilton's yellow card for pushing an opponent in the face.

Interim head coach Scott Johnson was unhappy with the sin-bin decision but was heartened by a spirited showing after last weekend's tame loss to Samoa.

"Last week we let ourselves down with our application and work rate," added Strokosch.

"We want to be defined by our defence and the defence was good - our line speed and collision was much better.

"[South Africa head coach] Heyneke Meyer came into our dressing room and congratulated us on how well we played and apologised for how the South African media treated us.

"That's a feather in our cap but we need to finish the tour with a win against Italy.

"We know we've got what it takes to win that game."

Tim Swinson impressed on his debut and the Glasgow lock is desperate for another taste of international action against Italy in Pretoria next Saturday.

"I think I did a lot of things well but there's also a lot to improve on," said the 26-year-old.

"But it was fantastic and I want to get back there.

"My first aim was to get three caps. One for my school, one for my club and one for myself.

"But I want to push on and get more and I want to show that I deserve a place."

Scotland lost Ruaridh Jackson - who had been playing his best game for his country - with shoulder damage and Ryan Wilson, on his first start, with a similar blow before the half-time interval.

But the second-half began with Scotland clearly taking Scott Johnson's half-time instruction - don't think the game is over, you must step up again - very much to heart.

Ryan Wilson, Peter Murchie and Tommy Seymour also made their first starts for Scotland in Nelspruit, while Dunbar debuted last weekend and Strokosch believes the team is in good shape, despite two consecutive defeats.

"There are some really talented boys coming through," he explained.

"Johnno said he needed to broaden the base on this tour and that's what he's done.

"The future is only going to be good."