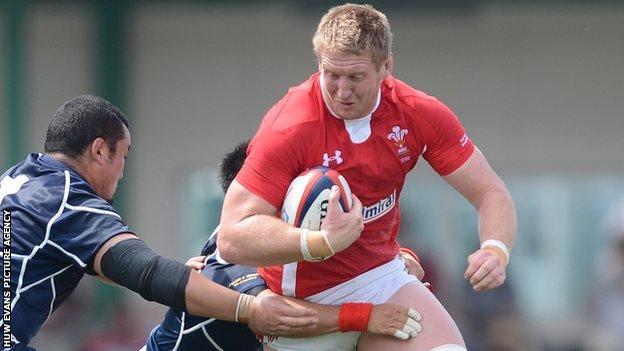 Wales captain Bradley Davies believes the tour to Japan will prove an important stepping stone for the young squad despite losing the second Test.

Japan levelled the series in Tokyo with a historic 23-8 win, their first success over a tier-one nation.

"We have just got to take it on the chin and we will learn from this," said Cardiff Blues lock Davies.

"The biggest positive from the tour is that we brought 27 boys away who were very inexperienced and now they have got the experience of Test rugby.

"Hopefully when they are given their chance again in the future, they will know what it's about, what to expect and perform better."

Wales fought back from 11-6 down at half-time to win the first Test in Osaka but then slumped to defeat in the second Test in Tokyo to end their season on a low note.

As a result, Wales visited the Far East with 10 uncapped players, while a further 10 members of the group had made fewer than five international appearances.

Japan came into the two-Test series battle-hardened by two tough Pacific Nations Cup encounters against Samoa and Fiji - both losses - and their match sharpness showed as they outscored Wales two tries to one in both games.

"I am every impressed with Japan and they are going to have more big victories soon," Davies added.

"They play an entertaining style of rugby to watch, though not so much to play against.

"I didn't think it was possible after the first game [in Osaka] but it felt even hotter in Tokyo. It was tough to play in, but that's not an excuse because we had two weeks to adapt.

"When we had the ball we created a lot of problems for Japan, but at the end of the day they took their chances and we didn't.

"We lost because we didn't take our opportunities, not because of the weather."