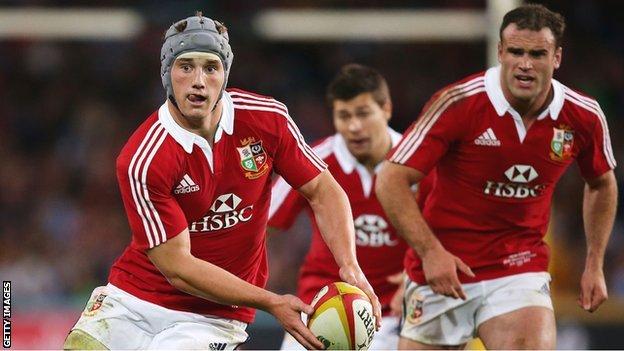 Roberts, who injured his right leg during the Lions' 47-17 win over New South Wales Waratahs, is rated "a grave doubt" for the clash in Brisbane.

But Davies, normally an outside centre, is prepared to step in at 12 if asked.

"Hopefully Jamie pulls through... you wouldn't want to see him miss out on a possible Test place," Davies said.

Roberts had been tipped to recreate his 2009 Lions midfield partnership with Brian O'Driscoll for the three-Test series against the Wallabies.

Manu Tuilagi would provide a similar style to Roberts but the England centre has been struggling with a shoulder problem.

But Davies' performances on tour and in particular against the Waratahs, in which he scored a try and gave the final pass for three others, have catapulted him into Test contention.

Davies has been rested for Tuesday's clash with ACT Brumbies in Canberra, suggesting that at the very least the 25-year-old Scarlet will be in Saturday's match-day 23.

Ireland's O'Driscoll could move to number 12 with Davies at outside centre where he usually plays for Wales, but he says he would be happy to move to inside centre if asked.

"I don't mind it, if that's the case I'll be more than happy to play 12 for the Lions," Davies said.

"But I think with the strength we've got, we've got to make sure we work hard and keep pushing ourselves.

"There is confidence in the squad, we've got a good understanding of what we want to do and what we want to achieve, and we've just got to make sure we keep our eye on the prize now and keep building.

"Since we've started we've come on a huge amount, we're giving ourselves time on the ball and Rob [attack coach Howley] has demanded high standards in training.

"I think we're driving that with the experience we have and the talent we have, which it's great to be part of and I'm loving every minute."

The win over the Waratahs was the Lions' most impressive performance so far of the tour and Davies was pleased with the tourists' all-round game in Sydney.

"The forward pack were very dominant, they were very powerful and they gave the backs time on the ball," Davies added.

"We just had to make sure we used it efficiently and I think at times we did, we were pretty dangerous with the likes of Simon [Zebo], Leigh [Halfpenny] and Sean [Maitland] - they're great runners of the ball.

"A couple of tries were left out there again but opportunities came and the boys took them, and that was good to see.

"We've still got things to work on but it's an important time now.

"With the strength of the squad we have there's a lot of competition... we're all pushing each other and the more that continues the better it will be in the long run for the Lions."