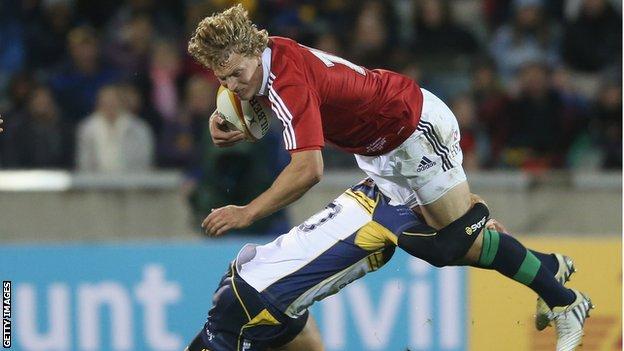 The British and Irish Lions suffered their first defeat to a provincial side since 1997 as their unbeaten Australian tour record came to an end in Canberra.

A pumped-up ACT Brumbies went one better than their predecessors of 2001 as they claimed a deserved and historic victory.

Tevita Kuridrani's early try helped the hosts to an 8-3 interval lead, with Stuart Hogg's penalty the Lions' only riposte.

The Scot landed another after Jesse Mogg had improved the Brumbies' lead to 14-3, but two further Owen Farrell penalties were not enough.

The Lions might have saved themselves from a scrum deep into ACT territory with three minutes left, but contrived to lose their own ball.

It was symptomatic of a dysfunctional set-piece display, with the line-out also suffering from captain Rory Best's squint throwing at regular intervals.

Precious few Lions improved their prospects of participating in the Test series starting in Brisbane on Saturday, when the real business of the tour will begin in earnest.

In order to rest some of those who will be involved on Saturday, Christian Wade, Brad Barritt and Shane Williams were all drafted in at 48 hours' notice for this banana-skin encounter.

Williams, becoming the oldest back to wear the famous red jersey at 36, almost scored with his first touch inside two minutes.

A neat line-out routine, involving a tap-down from Richie Gray at the tail, saw Ben Youngs and Wade combine, before Williams was bundled into touch in the left corner.

But that early confidence swiftly dissipated as the Brumbies attacked with width and stifled the Lions at the breakdown.

The hosts scored the opening try in the fifth minute when a long cut-out pass from Mogg found Andrew Smith who released centre partner Kuridrani into space. He barged through the non-existent tackles of Wade and Rob Kearney with ease.

Hogg over-cooked the re-start straight into touch, while a straightforward penalty came back off an upright as errors flowed from the Lions.

The Brumbies should have had a second try after 23 minutes but flanker Colby Fainga'a delayed his pass to Smith on the right wing just long enough for Kearney to divert it out of harm's way.

The tourists - albeit after just one training session together - continued to struggle.

Toby Faletau was turned over in the tackle, Hogg's pass went to ground, and the Lions were relieved to see a monster penalty attempt from Brumbies full-back Mogg drift narrowly wide.

When Ian Prior, who had earlier missed a conversion, was then off target with a penalty, the hosts had missed a further eight points.

But Mogg did land a penalty from just inside the Lions half as half-time approached to make it 8-0, only for Hogg to finally get the tourists on the scoreboard with the last kick of the half.

Best's wayward throw at the first line-out on the resumption didn't bode well, and when the Lions kicked a penalty to touch for a high tackle on Wade, his second wasn't high enough to reach Gray, allowing the Brumbies to steal it.

With their set-piece foundation unhinged, the Lions' frustration saw their discipline start to unravel.

Sean O'Brien was penalised for not rolling away and Ryan Grant for trying to extricate an opponent from a ruck by his head as Mogg improved the Brumbies' lead to 14-3 with two successful shots at goal.

Hogg did reduce the deficit with his second penalty, but another attempt - after a Lions pack bolstered by a a brand-new front row had drilled the Brumbies scrum backwards - came back off an upright.

The Scot's difficult evening came to an end as Farrell was sent on for the final quarter, with Conor Murray joining him at scrum-half.

Farrell cut the deficit to five points with his opening penalty after 63 minutes, and his second - a superb effort from the right touchline - made it 14-12 with eight minutes left.

Suddenly the first cries of "Lions, Lions" were to be heard from the travelling support, but as they finally started to build some pressure, Murray became isolated and the Brumbies won a relieving penalty.

The tourists then lost the ball on their own scrum as the Brumbies became the first provincial side since South African side Northern Transvaal to tame the Lions.