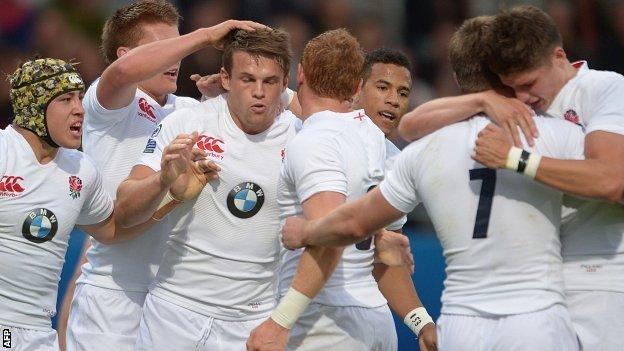 England will play Wales in the final of the IRB Junior World Championship after beating four-time champions New Zealand 33-21 in the semi-finals in France.

The Baby Blacks went in front through Epalahame Faiva's try but scores from Matt Hankin and Anthony Watson helped England into a 20-8 lead at the break.

The final will be on Sunday in Vannes.

It took a gutsy defensive effort for much of the second half for England to survive after they had dominated before the break, but they put their bodies on the line to set up the first all northern hemisphere final in the six-year history of the tournament.

The Baby Blacks put the ball through the hands from the first whistle but it was England who took an early lead through the boot of Exeter fly-half Henry Slade.

He landed two penalties, either side of a superb score from Faiva for the Baby Blacks.

They took a quick throw inside the England 22 and the hooker popped up on the overlap on the other wing with another man spare outside him to score an unconverted try.

England soon went back in front through Slade's second penalty and he extended the lead as he converted a marvellous try created by captain Jack Clifford.

New Zealand looked lively with ball in hand but a combination of their mistakes and the sheer power throughout the England team - especially at the breakdown where the likes of full-back Jack Nowell were outstanding - helped create their second try.

The New Zealanders were struggling to break down the solid white defensive wall England had erected and when they tried to go wide, Emery flung out a speculative pass and Watson's eyes lit up.

The London Irish flyer had read the play so well the pass went straight to him and he scored by the posts, with Slade adding the extras.

A Simon Hickey penalty kept New Zealand just in touch at the break at 20-8, and they needed to score first to have a chance.

It took a superb Sam Hill tackle to deny the flying Joe Webber but approaching the hour mark the southern hemisphere side still trailed by 12 points after Slade and replacement Te Rure exchanged penalties.

But they were starting to get on top at the breakdown and they hit back as Emery scooted over out wide.

Te Jure converted from the touchline to cut the gap to five points and the momentum was firmly with the four-time champions.

But they could not break down England's dogged defence and a rare late England attack saw Smallbone burrow over from close range.

Slade's conversion ensured England were already as good as into the final with five minutes remaining and his penalty on the final whistle merely added insult to injury.