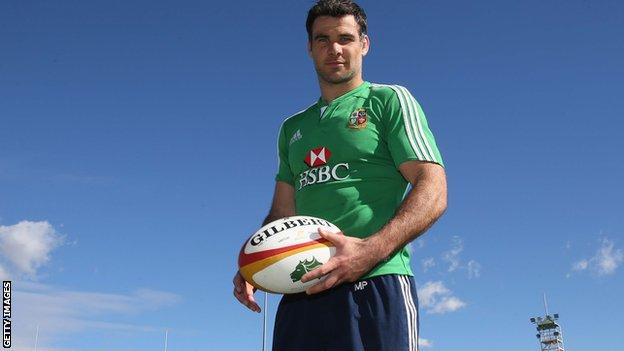 Scrum-half Mike Phillips says he is determined to erase the disappointment of losing the 2009 Test series with the British and Irish Lions.

Phillips is one of eight Welshman selected in the Lions side to face Australia in Brisbane on Saturday.

He played in the last Lions Test series which they lost 2-1 to South Africa.

"The last tour was the highlight and one of the most disappointing things to happen in my career for so far," said Phillips.

"Not being part of a winning Test team ... hopefully, this time around that will change if we can start with a big performance and get off to winning ways."

Phillips is joined by seven fellow Welshman in the Lions side selected by coach Warren Gatland for the first Test against the Wallabies.

Flanker Sam Warburton will captain the side, becoming the first Welshman to captain the Lions in a Test since Gareth Thomas in 2005.

The selection of eight Welshmen is one short of the record of nine selected in the first Test in 1971 and first and third Tests in 1977.

Alex Corbisiero's selection at loose-head prop ahead of fellow Englishman Mako Vunipola was the one real surprise in Gatland's team.

Phillips is one of seven players who played for the Lions in the last Test series in South Africa in 2009 and partners Ireland fly-half Jonathan Sexton at half-back.

The Lions had won all five games on tour before the 14-12 loss to ACT Brumbies in Canberra on Tuesday, their first defeat by a provincial side since 1997.

Phillips' personal duel with the Wallabies scrum-half and playmaker Will Genia has been eagerly anticipated and could prove to be one of the key battles of the Test series.

Phillips, who now plays his rugby in the Top 14 in France with Bayonne, is aware of the threat posed by Genia.

"He is the catalyst for them," said Phillips.

"Throughout the side they have talented players... dangerous and skilful players who can cut lines and holes so our defence is going to have to be top notch on the weekend if we are going to have any hope of winning this game."