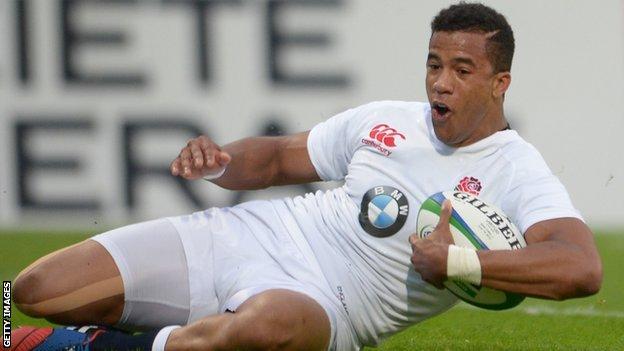 England full-back Anthony Watson says the Junior World Championship final will be the biggest game of his career.

Watson, who will join Bath from London Irish this summer, was among the try-scorers in England's 33-21 win over New Zealand in the semi-final.

The Under-20s will now meet Wales on Sunday in Vannes, France.

"Playing in the Premiership last year was obviously a highlight but playing the final will top that," the 19-year-old told BBC Radio Bristol.

"I'd definitely say it's the biggest game of my career so far."

England U20s had never beaten four-time champions New Zealand prior to Tuesday's victory, and they became the first team to stop the Baby Blacks reaching the final of the competition.

However, Watson, who has 10 caps, is aware of the challenge that faces them on Sunday.

"We played Wales in the Six Nations decider and they hadn't lost going into the final game. They haven't lost a game going into this final either.

"We know what threats they are going to possess so we'll have to combat that with our game."

England have never won the Junior World Championship despite reaching three finals, but Watson is hoping a victory this year will prove the talent that exists in the youth ranks.

"I think the attention shown to the Under-20s age group is growing and the final will be a really good spectacle," he added.

"If you look at who came through - Marland Yarde [London Irish winger] and Matt Kvesic [Gloucester-bound flanker] - for England against Argentina this year it shows what can happen.

"I think everyone is looking out for who is going to be the next star from this tournament."