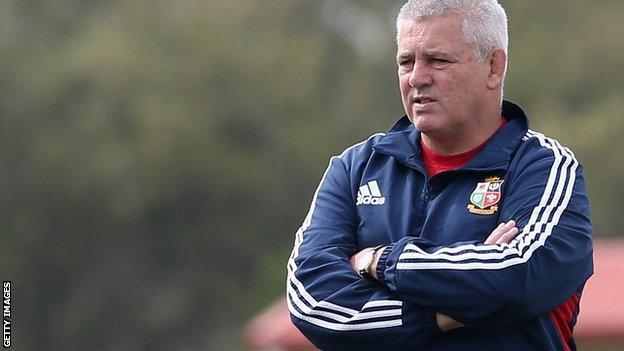 Sir Clive Woodward has praised Warren Gatland's choice of starting XV for the British and Irish Lions in the first Test against Australia on Saturday.

Gatland picked England prop Alex Corbisiero, who was not in the original touring party but was called up to replace injured Irishman Cian Healy.

"A fit Corbisiero is the right call," said Woodward, who coached the Lions in New Zealand in 2005.

"It's an excellent selection. I think it's a great Lions team."

Woodward, who led England to their 2003 World Cup triumph in Australia, agrees with Gatland's view that Corbisiero's superior scrummaging skills earned him a place in the team ahead of England's Mako Vunipola.

He told BBC Radio 5 live, "Rugby is still a fairly straightforward game in terms of scrums and line-outs, and I think Corbisiero is ahead of Vunipola."

Woodward also had sympathy for the back-row players omitted from the 23 named for the match in Brisbane.

Wales' Dan Lydiate is preferred as back-row cover to Toby Faletau and Sean O'Brien, as Tom Croft, Jamie Heaslip and captain Sam Warburton renew their combination from last Saturday's 47-17 win over the Waratahs.

"The guys who started against the Waratahs played exceptionally well. The balance looked great, but it's tough not to pick O'Brien especially, but they've not played in the big games and not had a chance to show.

"It's a great backline, George North getting through fitness-wise is a massive fillip to everybody.

"Jonathan Davies against the Waratahs was one of the best displays I've seen since Will Greenwood at his best. In a star-studded backline I think Davies has been the star of the trip so far, I just hope he can have a great game on Saturday night."

Centre Davies and open-side flanker Tom Croft both sat out training on Friday ahead of the first Test, but Lions assistant coach Andy Farrell insists both will be fit to play in Brisbane..

Farrell explained that the squad had a double training session on Thursday, meaning some players were not being pushed with only 24 hours to go until the Test series begins.

Croft has "a little inflammation in his toe" and Davies "stiffness" but Farrell says both will be "absolutely fine".