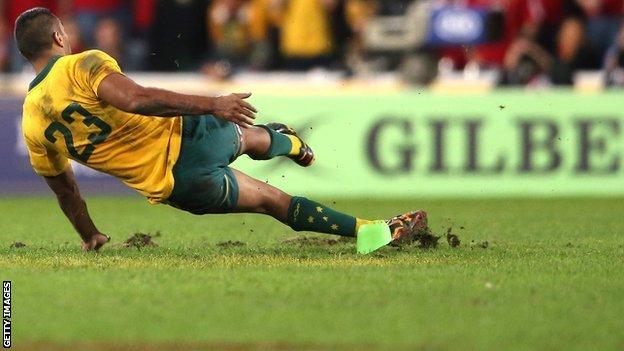 Beale's left standing foot slipped as he lined up the last-minute penalty that would have won the Brisbane encounter for the Wallabies.

Gatland also turned up the heat on his beleaguered counterpart Robbie Deans by suggesting Beale should have been better advised.

"If I was a coach looking at Beale coming on, I'd see he was wearing boots with 'mouldies' (moulded studs)," said Gatland.

"He has slipped over taking the last kick of the game and he slipped over on a couple of occasions before. You have to ask why he was coming out on the field wearing that sort of footwear in those conditions.

"We have these issues a lot with our [Wales] players at the Millennium Stadium. That is quite a slippery surface. We have spoken to them a lot about making sure they have the right footwear.

"As a professional you have got to turn up with the right tools. That is part of your job, to make sure you are prepared."

Beale came on as a replacement at full-back just before half-time for Berrick Barnes (jaw), who is one of five Australian backs now in doubt for Saturday's second Test in Melbourne.

Centres Pat McCabe (neck) and Adam Ashley-Cooper (shoulder), and wing Digby Ioane (shoulder) also had scans on Sunday while Christian Leali'ifano, knocked out by a blow to his head in the opening minute of his debut, will also be reviewed.

The Wallabies have already called up centre Ben Tapuai and full-back Jesse Mogg - who starred in ACT Brumbies' victory over the tourists last Tuesday - as well as veteran flanker George Smith.

That is in contrast to the Lions, with Gatland facing some tough selection decisions this week now Tommy Bowe, Manu Tuilagi and - potentially - Jamie Roberts are all back in contention. Their only minor concern is prop Alex Corbisiero, who came off on Saturday suffering from a tight calf muscle.

The likes of try-scoring wing Alex Cuthbert and in-form centre Jonathan Davies could find their places under threat, with Bowe almost certain to start despite not playing since breaking a bone in his hand two weeks ago against Queensland Reds.

Gatland revealed that once he knew Bowe would be fit for the second Test, he was happy to gamble on starting George North in Saturday's Brisbane epic, despite concerns his hamstring would not last the full match.

"Tommy is one of the best players that we have got available to us," Gatland said. "He is one of the reasons we took a risk on George.

"The medics said there was a reasonable chance his hamstring wouldn't last the 80 minutes. But we felt we could take a reasonable risk knowing Tommy would be available for next week.

"If the Lions victory owed as much to the inadequacy of their hosts in one critical department as their own efforts, so be it. Any Lions Test victory is to be cherished. They have only won two of the last nine, after all.

"Here was an occasion that lived up to the hype in spectacular fashion, with the 25,000 Lions fans in an enthralled capacity crowd playing a full and vociferous part."

"The advice was he would probably get to 50 or 60 minutes, which is normally the crucial part with these type of injuries when it is likely to go again. So for him to get through the whole match was fantastic."

Despite issues with how referee Chris Pollock controlled the breakdown and tackle contest, Gatland admits his side may have benefited from the luck that deserted them at crucial moments in South Africa four years ago, with Beale missing two match-winning penalty chances.

"The problem with Test-match rugby is there is nothing in between - it is either agony or ecstasy," Gatland said. "If that kick had gone over, it would have been a completely different mental attitude now."

Despite the odds seemingly stacked in their favour on the personnel front, Gatland insists there will be no complacency with the chance of a first Test series victory since 1997 in sight.

"These players are well aware they have the opportunity to create their own history," he added.

"There's a been a lot written about whether the concept of the Lions was going to continue in the professional game, after what happened in New Zealand in 2005.

"Part of the remit in 2009 was getting some respect back into that red jersey. That was the focus but it was a series we probably could and should have won.

"But this series isn't about respect, it is about delivering and these players are well aware of that.

"When you see the crowd and the atmosphere at a game like Saturday's, there is something special, that apart from maybe a World Cup only a Lions tour can create.

"We need to keep that sort of fantasy and mystery alive as a spectacle because it is incredibly special."

5 live Rugby, with the latest rugby union news and interviews from the British and Irish Lions tour of Australia, is on BBC Radio 5 live, 22:00 BST, Tuesday 25 June.