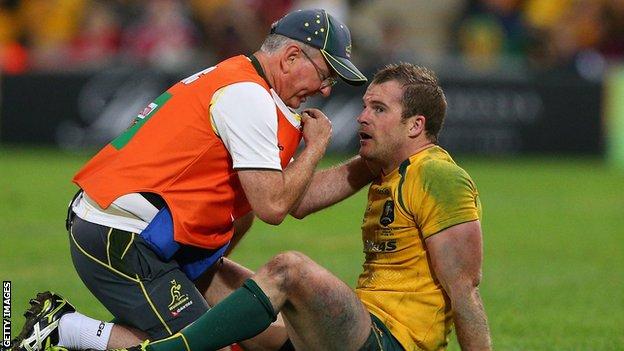 Australia's Pat McCabe has been ruled out for the rest of the year after suffering a recurrence of a neck injury against the British and Irish Lions.

McCabe, 25, was taken off during the hosts' 23-21 weekend Test defeat, with medical checks showing a fracture to the bone he first damaged in November.

The Brumbies centre will spend at least the next six weeks in a brace, but is hopeful he could make a playing return.

"If the brutality of the collisions wasn't quite on the scale of the second Test in South Africa four years ago, it wasn't far off.

"Lions coach Warren Gatland described it as a 'bit like a sparring match, both teams finding out about each other'.

"The body count was huge. But it was Australia, rather than the Lions, who lost four players to injury and ended with others playing out of position."

"I think I've got plenty of games left in me," he said.

"It was encouraging to hear the specialists being positive both about the recovery process, but also the possibility that I could be able to return to the playing field.

"It is human nature to think the worst, but I'm in good hands medically.

"We'll see how the rehabilitation goes and take it from there. I'd obviously like to get back into it, but I'll be taking no chances with my health either."

McCabe will miss the remainder of the Lions tour, the rest of the Super Rugby season with the Brumbies, Australia's Rugby Championship campaign against South Africa, New Zealand and Argentina, plus their end-of-season tour to Europe.

Saturday's opening Test was the Manly-born player's 20th cap for his country since making his international debut against Italy in 2010.

McCabe was not the only Wallabies star to pick up a series-ending injury in the bruising encounter in Brisbane, with 27-year-old wing Digby Ioane also set to miss the final two Tests against the Lions with a shoulder problem.