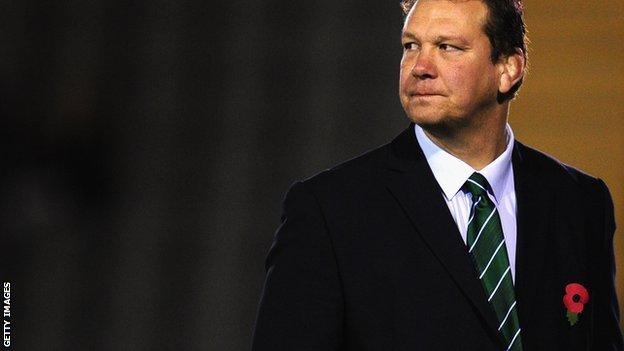 Nottingham head coach Martin Haag says their financial problems mean they will have to work with a reduced playing budget next season.

The Green and Whites finished second in the Championship last season but will have a smaller squad this time around.

"We are where we are, and have what we have," Haag told BBC Radio Nottingham.

"You have a pot of money and things that you want, unfortunately they don't always marry up. Things change and hopefully they will."

We will need to show that hunger and desire, even more so than last season

Nottingham were struggling to find the £250,000 they needed to complete last season but have been involved in discussions with two potential new owners.

However, the money worries mean that Haag has only 23 players signed up for next season, although he is also looking to make several dual registration signings and will be able to call upon players from the youth set-up.

Last term the club had a squad of 30 full and part-time contracted players, with a further eight on dual-registration deals with Premiership clubs.

Chief executive Simon Beatham confirmed that the Meadow Lane club, which finished second in the Championship and qualified for the first play-off semi-final in their history last season, has been forced to make cutbacks.

"The playing staff, and staff off the field, has been reduced," Beatham said.

"We are having to work really hard to get through this season and we are going to have to cut the cloth accordingly for next season.

"So far, with the squad that we have got, although numbers are smaller, the calibre is absolutely there."

Haag refuses to be distracted by finances, and remains focused on repeating last season's play-off appearance.

"I'm really pleased with what we have got at the moment," Haag said. "Yes, I would like to strengthen it because you need strength in depth.

"We want to do well, push ourselves as much as we can. We will need to show that hunger and desire, even more so than last season."