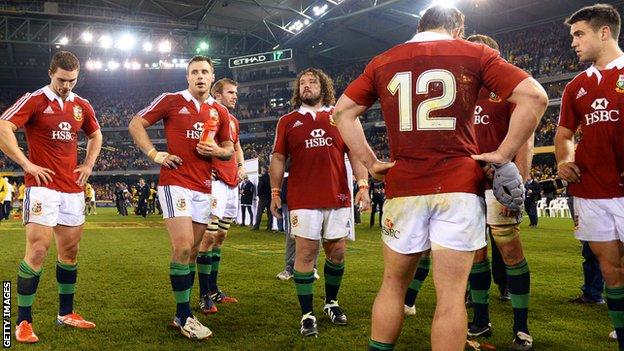 There goes the knees-up in Noosa then.

With five minutes to go of this second Test cliff-hanger, it was all going to plan.

The series in the bag, the amber nectar on ice, an enticing few days beckoning the British and Irish Lions at the resort on Queensland's Sunshine Coast where they head on Sunday.

A chance to chill out and celebrate a historic victory, do a bit of surfing and then contemplate a dead-rubber third Test in Sydney. If only.

Yes, the Lions will still have some down time over the next 48 hours, as they try to recuperate from the physical and mental strain of another tumultuous Test.

But the mood now will be very different. A chance to tie up the series, to make history and join the legends, has slipped through their fingers.

Will they get a better one? Australia, so resilient and resourceful in desperation, conjured up a decisive winning play that ultimately proved beyond the Lions.

The hosts head to Sydney for a winner-takes-all duel in buoyant mood, with confidence restored, and ambition renewed.

For neutrals, it is the perfect scenario, but it was one the Lions - for all their post-match positivity - were desperate to avoid.

On Thursday Warren Gatland said it was the "last thing" he wanted to be thinking about.

Two days later, he was insisting there would be no problem lifting his players for the mother of all finales at the former Olympic Stadium where the last series was also memorably decided 12 years ago.

"I don't think it is going to be tough at all," said the head coach. "They have got a couple of days off to recuperate and when they get back on the training field they will realise how close we came to holding Australia out and winning that. Next week is another massive opportunity. It just shows how exciting this series is."

Even if Gatland is adamant each Lions series is a separate entity, unaffected by what has gone before, the history of the last two between the sides, in 1989 and 2001, tells us that the one who wins the second Test goes on to win the series.

It was hard not to detect an echo of the 2001 denouement when Liam Gill jumped in front of Tom Croft to steal Richard Hibbard's late line-out throw, as the Lions tried to rescue the game. Martin Johnson must have winced. Justin Harrison would have approved.

While Gatland and his perennially optimistic captain Sam Warburton were right to point out the prize is still there to be seized, it is difficult to avoid the feeling the momentum now lies with the Wallabies.

The hosts didn't play particularly well themselves and yet - as captain James Horwill put it - still "found a way to win".

Horwill likened next Saturday's encounter to a Grand Final, Warburton a "cup final". But neither leader is guaranteed to be involved.

The Australian lock faces an appeal hearing on Monday initiated by the International Rugby Board into the original decision to clear him of stamping on Lions lock Alun Wyn Jones in the first Test.

Warburton faces a worrying 48 hours - and a couple of sleep-deprived nights icing his injured hamstring every two hours - before knowing if he will be fit to lead the side.

His absence would be another blow given his performance on Saturday, which Gatland labelled "brilliant", particularly at the breakdown where the Lions prospered until the final quarter.

But while the line-out again functioned well until that late lapse, the scrum continued to frustrate.

The Lions will be hoping loose-head prop Alex Corbisiero has recovered from the calf strain that ruled him out in Melbourne.

Mako Vunipola has had a superb tour, topped the tackle count here with 15 and carried more ball than any other Lions forward. But he quickly appears to have gained a reputation as a technically deficient scrummager.

The 22-year-old came back well after twice being penalised for collapsing in a nightmare 10-minute spell, but may revert to his impact role off the bench.

The Lions also improved in the scrum with the introduction of Richard Hibbard at hooker. The Welshman may also be considered for a start next week.

That will not be the only selection dilemma.

The Lions rarely threatened to produce a try in a game dominated by defences, and failed to register a single line break.

Last week fly-half Jonny Sexton mixed up his game with several chips over the first line of Australian defence. Those were absent from his repertoire in Melbourne, although the Lions did gain some joy from their kick-chase game, with several high bombs falling their way.

But Sexton - from two half-breaks - made by far the most metres (41) in attack (the next highest was Sean O'Brien with 17m, and he was only on for the last 16 minutes), and there is clearly a need for greater ball-carrying punch.

There will be a strong temptation to bring either Manu Tuilagi or Jamie Roberts - if he is fit enough - into the midfield to provide a more abrasive gainline presence.

The easy option may be to drop Jonathan Davies, but the Welshman has been the form centre of the tour. His more illustrious partner Brian O'Driscoll was heroic in defence, completing all 14 tackles, but struggled to unlock the Wallabies defence, with one pass straight to the waiting Israel Folau.

With scrum-half Ben Youngs delaying his feeds at scrum-time and not offering a running threat to distract the Australian back row, Mike Phillips may also be recalled if his knee is sufficiently rested.

The removal of number eight Jamie Heaslip early in the final quarter may be a source of hope for Toby Faletau, who tends to thrive in more claustrophobic conditions.

Ian Evans is also an option in the second row, although Geoff Parling didn't miss one of his 14 tackles and ran an almost faultless line-out until the last knockings.

When Halfpenny took the Lions 15-9 clear with his fifth penalty with 17 minutes left, they appeared too ready to sit on the lead, and defend what they had.

In fairness the wall of red shirts had shown little sign of yielding, but with Warburton's departure in the 67th minute, the Wallabies were able to generate quicker ball at the breakdown.

Scrum-half Will Genia probed with greater freedom, and wing Israel Folau, relatively well shackled until that point, was brought more into the game.

Ashley-Cooper's try was deserved reward for their perseverance, but even in injury-time the Lions could have snatched victory.

To blame Halfpenny for their failure to seal the deal would be harsh in the extreme. His two misses from seven attempts were both at the limit of his range.

Given the chance to win the series in similar fashion next week, you wouldn't bet against the Welsh full-back. But as Horwill declared, "all bets are off" now.

"Both teams are evenly matched, we have been feeling each other out," he added. "The game of chess will continue."

The Lions had the Wallabies in check. And they may yet be leaving Australia as Test series winners.

If so, they will have done it the hard way.