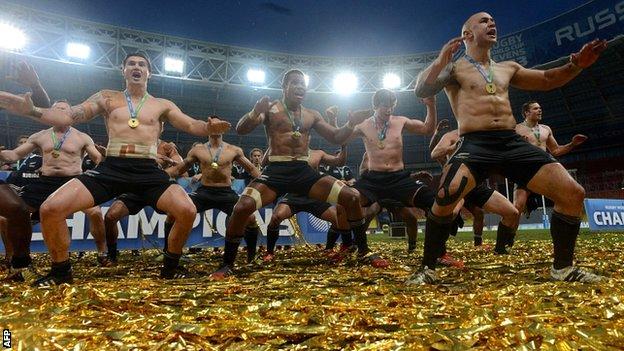 The first semi-final between the All Blacks and Fiji was suspended for an hour after a thunderstorm left the Luzhniki Stadium pitch saturated.

After the Kiwis won 17-0, Dan Norton's two tries helped England join them in the final with a 12-5 defeat of Kenya.

But they were never in contention against the All Blacks, who scored five tries in a record final scoreline.

Tim Mikkelson raced over within the opening two minutes and crossed again before the break as New Zealand surged 21-0 ahead at half-time in the 20-minute contest.

England, who won the inaugural competition in 1993, could find no way back as Tomasi Cama, Waisake Naholo and Gillies Kaka also scored tries in a one-sided encounter.

Victory completed an emphatic double for New Zealand after they won the women's event, also scoring five tries in beating Canada 29-12 in the final.

England's women, who lost 24-7 in the quarter-finals against the Kiwis, made it through to the final of the Plate competition but lost 14-5 to Australia despite a try from Rachael Burford.