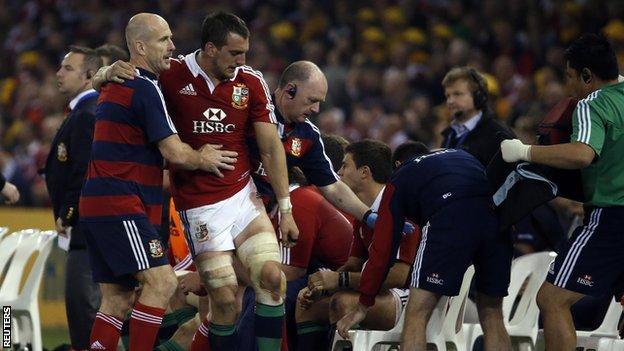 Sam Warburton's absence from the British and Irish Lions' series-deciding Test is either the latest mortal blow to their hopes of making history, or a chance for someone to make a mockery of Warren Gatland's choice of captain, depending on your point of view.

That [would be] a huge loss but they have a lot of depth in the back row. They're certainly not lacking in good number sevens and O'Brien is a class act

Such is the extent to which Warburton has divided opinion among the rugby fraternity in his relatively short, but highly successful, Test career to date.

To some, he is an articulate poster boy of the new breed of rugby professional, supremely dedicated to his trade and fiercely ambitious.

To others, he is not even the best open-side flanker in Wales, let alone the four home unions, and owes his exalted status as a Lions captain at 24 to Gatland's patronage.

Warburton came into this tour with a knee injury and after missing the first two matches, made a slightly laboured start against the Queensland Reds, who ran the tourists ragged.

His next game coincided with an outstanding team performance against New South Wales Waratahs, particularly up front, setting aside doubts about his place in the Test side.

Warburton tends to perform at his best when it matters most. Witness his man-of-the-match displays for Wales at Twickenham in the 2012 Grand Slam campaign, and at Murrayfield on his return to the side this year.

For 67 minutes of the second Test in Melbourne, it appeared he would add another gong to his collection. Sir Clive Woodward, observing this tour first hand, described it as the "most outstanding performance I have ever seen from a Lion".

Warburton's departure changed the momentum of the match, and possibly the outcome of the series.

The Lions have also lost an accomplished communicator. One reason Gatland cited for choosing the Welshman in the first place was his easy relationship with referees.

The choice at open-side boils down to either Ireland's Sean O'Brien or Justin Tipuric, Warburton's rival for the Wales jersey for the past 18 months.

O'Brien, who was selected on the bench for the second Test and came on at number eight, is the more physically imposing option, a punishing ball-carrier and tackler, but not an over-the-ball, jackalling forager like Warburton.

To some observers he is a 'six-and-a-half', a more natural blind-side flanker playing at open-side. To illustrate the point, the 26-year-old has started twice in each position on this tour.

Tipuric, at 23, is less experienced, but would be a more like-for-like replacement. His mobility, vision and passing game could also provide the Lions' attacking game with a new dimension, as he demonstrated in Wales' Six Nations title-deciding victory over England.

The captaincy should be relatively straightforward, with a former Lions captain and living legend in Brian O'Driscoll almost certain to step in.

It would certainly provide a compelling storyline for what should be O'Driscoll's final act in the red jersey, his last chance to secure a series win at the fourth attempt.

O'Driscoll, 34, has led the Lions on seven previous occasions, including twice on this tour, but cruelly only once in a Test, his participation in the 2005 series curtailed in controversial fashion inside the first minute of the first Test.

O'Brien or Tipuric at seven?

With Paul O'Connell, the other former captain in the squad, already ruled out by a broken arm sustained in the first Test, there should be no debate.

The only fly in the ointment is that O'Driscoll has not been at his sublime best in the first two Tests, even if his 14 tackles were at the heart of the Lions' defensive effort in Melbourne.

With either Jamie Roberts or Manu Tuilagi a strong bet to come into the starting line-up at centre, either Jonathan Davies or O'Driscoll would need to make way.

The latter scenario seems unlikely, even if Davies has been one of the stars of the tour. The Welshman has played more minutes - 425 - than any other player, though, and the first signs of that intense workload may have crept into his performance in Melbourne.

Besides, if not O'Driscoll as captain, then who?

Lock Alun Wyn Jones has been one of the stand-out performers in the biggest games on this tour, and has led Wales in the past as well as his club side Ospreys.

He is already one of the more vocal rabble-rousers in the dressing room, but may be best left to concentrate on the enforcer's role he has performed superbly.

Dan Lydiate, similar to Warburton in temperament, attitude and age, led the Lions in their final midweek game against Melbourne Rebels, and drew praise from Gatland for the way he approached the task, on and off the field.

But he will already have a major role to play in replicating his thunderous defensive effort in the second Test, unencumbered by the extra responsibility of captaincy on such an intense occasion.

Gatland has shown he is not afraid to make hard decisions when it comes to selection. But leaving out O'Driscoll for such a potentially defining match in his career would top the lot.

Super Sam may have bitten the dust, but in BOD he will surely trust.