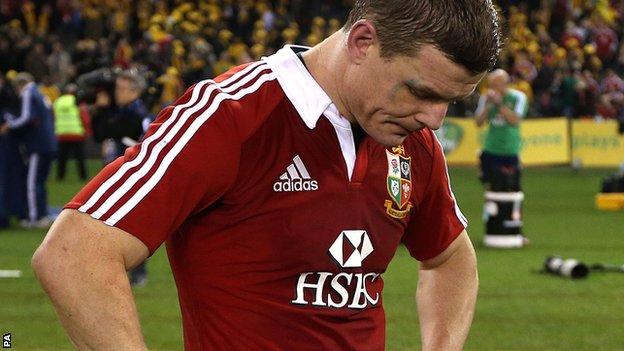 Wales lock Alun Wyn Jones will captain the Lions in the final Test against Australia on Saturday after Brian O'Driscoll was dropped from the squad.

Irishman O'Driscoll was favourite to replace injured skipper Sam Warburton and has been left "totally gutted" by his shock omission.

Alun Wyn Jones is one of 10 Welshmen in the side, equalling the Lions record.

"You just wonder if they got a lucky bag and picked some names out. The Lions won the first Test and made eight changes to their squad. The Wallabies won the second and probably won't make any changes. The Lions lose by one point and there are six changes in the team and three guys on the bench who were nowhere near the team for the second Test. I was convinced Brian O'Driscoll should have been named as captain. It's catastrophic leaving him out. He's still one of the top centres in world rugby. He's a fantastic guy and has been on four tours and knows it all inside out. It's a massive mistake."

There is a further positional change, with Jonathan Davies reverting to his more regular outside centre role, having started in the number 12 jersey for the first two Tests alongside O'Driscoll.

With the series tied at 1-1, Gatland - also head coach of the Wales national side - turned to many of the players he knows from that role for the deciding final game in Sydney.

The selection of 10 Wales players equals the record for the number of Welshmen in a Lions starting XV set in the first Test against Australia in 1950, while there are also three Irishmen and two Englishmen.

The record for the number of players from a single country is 12, when a dozen Englishman started for the Lions in the late 1880s.

Roberts missed the first two Tests - a 23-21 victory in Brisbane followed by a 16-15 defeat in Melbourne - with a hamstring problem but returns to partner Davies after O'Driscoll's omission.

O'Driscoll, 34, was seen as the likely replacement for Warburton as he has led sides at international level on a world-record 84 occasions - in 83 of his 125 Tests for Ireland, plus the first Lions Test in New Zealand in 2005.

He has also captained the Lions in six other tour games, but his performances in the first two games against Australia prompted Gatland to look elsewhere.

O'Driscoll wrote on Twitter: "Obviously totally gutted at being left out for deciding Test but all efforts go into preparing the boys to see it through."

Gatland said it was the first time a coach had dropped O'Driscoll in "15 years of rugby".

"It's not easy for that to be the first time but he is still going to be very important for us in the next 72 hours in terms of his experience and leadership," added Gatland.

"Brian was disappointed but he appreciated that he was spoken to before the team announcement.

"Jamie is back fit and has been given the nod because of his partnership with Davies."

Alun Wyn Jones leads the Lions for the first time, though the 70-times capped 27-year-old has captained Wales once before.

"Hopefully I've been selected for the way I play and not necessarily the way I lead," said the second row. "I played from the start of the tour with an eye on getting into the first Test.

"To be selected in the position I am for the final Test is a pretty special moment for me personally, but obviously there's still a job to do."

Gatland added: "He leads from the front. He's been outstanding in the lead-up games and was one of the first names on the teamsheet when we picked the side for the first two Tests.

"He'll lead by example. There are leaders in other positions as well."

The new Lions captain will line up opposite Australia counterpart James Horwill, who was cleared of stamping on the Welshman's head in the first Test.

With Warburton absent, versatile Irishman O'Brien, who has started two games at six and two at seven on tour and came on at number eight in the second Test, gets the nod over open-side specialist Justin Tipuric, who is on the bench.

There are further changes among the replacements, with lock Richie Gray included in the matchday squad alongside centre Manu Tuilagi.

Hooker Tom Youngs and prop Mako Vunipola drop down to the bench, but O'Driscoll, scrum-half Ben Youngs and number eight Jamie Heaslip are omitted from the 23 altogether.

This will be the third successive Lions tour to Australia that has gone to a decisive third Test. The Lions won 19-18 in Sydney in 1989 but were beaten 29-23 on their most recent tour in 2001. They have not won a Test series anywhere since their victory in South Africa 16 years ago.