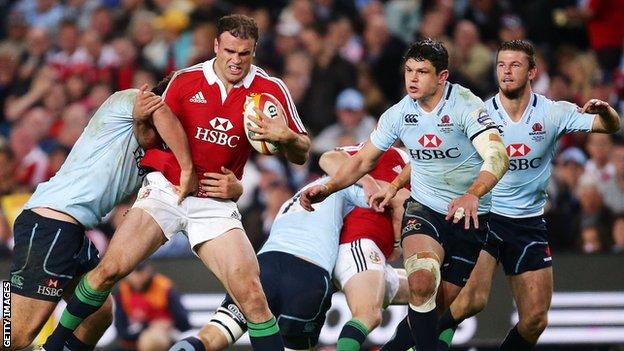 The British and Irish Lions remain optimistic Jamie Roberts, Mike Phillips and Alex Corbisiero will be available for Saturday's series decider against Australia in Sydney.

Roberts missed the first two Tests with a hamstring injury, while Phillips (knee) and Corbisiero (calf) sat out Saturday's defeat in Melbourne.

The trio need to prove their fitness when training resumes on Wednesday.

"The medics are reasonably hopeful."

All three could potentially come into the starting XV, to be named on Wednesday, for the final Test with Warren Gatland and his coaches meeting on Tuesday to discuss selection.

The Lions already need to replace injured captain Sam Warburton, ruled out with a hamstring tear, with either Ireland's Sean O'Brien or Welshman Justin Tipuric ready to take over at open-side.

Brian O'Driscoll is expected to lead the side in what would be his final Lions Test, but Irvine conceded the loss of their captain is a "serious blow".

"Sam started the tour with a knee injury but got better as the tour progressed," Irvine said.

"In the first half of the second Test, I thought he was the outstanding player on the park. He's extremely disappointed that he's not available for what is going to be one of the biggest games the Lions have played for 30 or 40 years.

"We can't hide from the fact it is a big blow not having our captain when he is in such good form. But on the positive side we're fortunate that it's one of the positions where we have tremendous reserve strength."

While the Lions have lost their leader for the third Test, Australia have been boosted by the availability of their captain James Horwill, after he was cleared by an independent appeal official of stamping on Lions lock Alun Wyn Jones in the first Test.

"We were surprised as anyone when the IRB (International Rugby Board) said they were going to investigate it," Irvine said. "We were of the view it was done and dusted and it's irrelevant now as far as we're concerned.

"My view was it didn't look very clever and the ball wasn't close to it, but I've seen a hell of a lot worse in my time."

The Lions have been relaxing on the Sunshine Coast since their second Test in Melbourne, a decision Irvine defended after criticism from former England and Lions coach Sir Clive Woodward, who labelled it "a mistake".

"I've been on five Lions tours now and, believe me, after the second Test the boys are physically and mentally exhausted. They need a break," Irvine added.

"This place has been absolutely fabulous - the lads needed to recharge the batteries and where better to do that than here.

"It's back to the hard work tomorrow [Wednesday] because on Saturday we have one of the most vital matches the Lions have played in a long, long time."