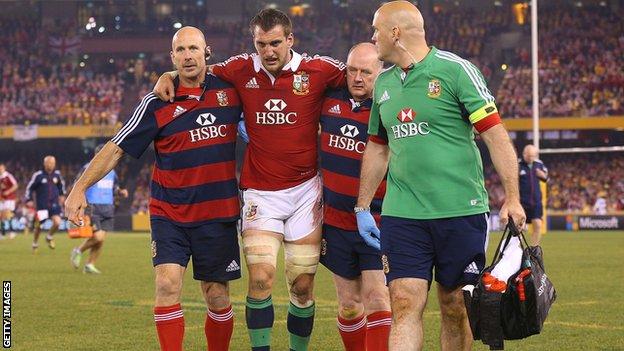 - How big a loss captain Sam Warburton is to the Lions

- His preferred Lions centres for Saturday's decider against the Wallabies

- Loving the chance to shine at the highest level

- Who he expects to start in the back row on Saturday

Jerry answers questions posted on the website at the start of every week - entries are now closed for this Q&A and this week's answers appear below. Look for the Ask Guscott story next Sunday to ask Jerry a question.

After his performance on Saturday, is losing captain Sam Warburton a huge loss for the Lions? I don't think it will be with Sean O'Brien in such good form. Also, do you think the back line - and the centres in particular - should be changed? The Lions are just not going to beat the Aussies without scoring tries. JohnnyWAL

I thought Warburton played well on Saturday - he tackled pretty much everything and slowed the Aussie ball down. However, O'Brien would get the momentum that the Lions require and his direct approach with ball in hand could be the answer.

Justin Tipuric is more of a link player and I don't believe Warren Gatland wants to go in that direction, so O'Brien will be the likely replacement for the final Test. The Lions' game-plan requires players regularly getting over the gain line, so Jamie Roberts or Manu Tuilagi would be better suited to achieving that at centre.

Do you think that Brian O'Driscoll's selection was correct this year? To me, he looks a shadow of the player he once was and was pretty awful on Saturday. In your opinion, is he a Lions player based on what he has done in the past, or for what everyone believes he can do in the future? If what he does in the future is give away penalties and wayward passes, say goodbye to the third Test. Morgan

O'Driscoll deserves his spot. Leading into the Tests he played well and every team needs its leaders. With Warburton out of the last Test, O'Driscoll could well be captain. The pairing of Jonathan Davies and O'Driscoll in the centres was never going to be the perfect match and personally, if Roberts is fit for the weekend, I'd bring in either him or Tuilagi to partner O'Driscoll.

Davies put himself in no-man's land for the Adam Ashley-Cooper try on Saturday, he came to help O'Driscoll stop James O'Connor when he didn't need to. O'Driscoll's defence is still top drawer and everybody can throw the odd loose pass, but he doesn't make a habit of that.

Do you think with the Lions' mediocre performances, especially in attack in Melbourne, that they have to take the gamble and surprise the Aussies by sticking both Tuilagi and Roberts in for the ineffective duo of Davies and O'Driscoll? Would that put the Aussies on the back foot and give the Lions some drive? joemercersway

I would be equally pleased with either Davies or O'Driscoll at outside centre, and Roberts or Tuilagi at inside. Let's not forget, Tuilagi has played most of his international games at outside centre so a Roberts/Tuilagi combo would be very powerful. O'Driscoll is likely to be captain in the absence of Warburton - so he'll be playing.

Hi Jerry. Two questions. What tactics should the Lions have tried to see them through that last 20 minutes? More possession? Better territory? Attack the best means of defence? And what changes would you make for the final Test, fitness permitting? Mr_Wood

To close out a game you need control of the ball and, if you haven't got that, you need a momentum-changing tackle to get it back. I would like to see the Lions adopt the tactics they used against New South Wales and go out to score tries.

I think loose-head prop Alex Corbisiero and scrum-half Mike Phillips will come back, plus Roberts, if he is fit, with O'Brien replacing Warburton. I would also think about maybe Richie Gray or Ian Evans coming into the second row.

Simply put, who do you think is in the ascendancy now? Yes the Aussies won this game (and James Horwill has been cleared to play next weekend) but with some potentially key Lions players back in contention for the last Test, it makes me feel that this final game is well and truly balanced. Kentendo

Without doubt the momentum is with the Aussies after they won the last match, but they will be annoyed with themselves because that could have been the end of it for them, as they should have won the first Test as well.

This last Test didn't reach the level we expected - we all thought it was going to be a humdinger. But the Lions certainly fell short of their expected performance levels and they will have to create try-scoring opportunities like they did in the first Test if they are to win in Sydney.

Having seen the Wallabies get through phase upon phase without any penetration throughout the second Test and the inability of certain players (Kurtley Beale) to take advantage of clear overlaps, is Robbie Deans fit to be Australia coach? The team contains vast amounts of potential but it isn't being harnessed under Deans' plans. mo_ab

Deans has done a reasonable job in his time with the Wallabies and, as with all head coaches, not every one of his selections is going to be universally liked - that's nothing new though. The Aussies made a lot of uncharacteristic, unforced errors that led to attacking opportunities ending. I don't believe they will make those errors again.

O'Connor playing at 10 is difficult to fathom as he really has none of the game-management abilities required by that position - it's difficult to see what Deans is trying to achieve by having him play there. Deans is a very capable coach, he's just not got the Aussies to click as often as they should have given the available talent.

With the series on a knife-edge, what do you think Warburton would have said to his team in the pre-match talk for the final Test? schoolies

I think he would have told his team what captaining and playing for the Lions means to him. He'd have mentioned how hard everyone has worked to get to this point and what a shame it would be to get this close and miss out.

Now it will be down to the likes of O'Driscoll and other experienced players to give words of encouragement. You don't need to say much in situations like this, all the players know what's at stake. It's about being incredibly confident that you've prepared in the best possible way and have everything covered. Then it's your ability against that of another side's to decide who is the best.

You've got to love that opportunity, I did.

What Lions back-row set-up is best suited to go out to win the third Test, especially at blind-side? Dan Lydiate's tackling, Sean O'Brien's ball carrying and Tom Croft's athleticism all have their merits. And is Justin Tipuric sure to start at seven now that Warburton is out? Dan Rodwell

Personally, I would pick Tipuric - he's the best-linking seven and the quickest, but I feel Gatland is likely to pick O'Brien. The Irishman is great at carrying the ball but he rarely passes, which means he's predictable, but Gatland likes that carrying ability.

I would bring back Croft, which is also unlikely, and select Toby Faletau at eight, but I think Gatland will pick, Lydiate, O'Brien and Jamie Heaslip.

O'Brien or Tipuric at seven?

What can any of the Scottish players do to get a Test cap? Mako Vunipola is a great player, but was having a bit of a nightmare. Given that he emptied the bench and Ryan Grant wasn't used, are we to assume Gatland is convinced that we're not up to it? stouff

It's beyond me why Grant didn't come on, given scrummaging generally is important, only Gatland can answer that one! The lack of Scottish representation on the field in the first two Tests shouldn't be an issue, it's about the Lions - not one country. Until they are selected and play, we won't know what difference they would make.

I feel very proud of the effort the boys put in on Saturday, they really tried their best and you can't ask more than that. I just can't help think we really need to look at how to adapt these Lions tours to make it work in the modern game. What changes would you make for future tours? Personally, I think it would be better to have fewer games and more time together for the team. Dave Morgan

It's been mentioned by Ian McGeechan - and I agree with him - that in the Lions year the season should be shortened to enable more preparation time. The opposition, certainly in Australia, needs to be tougher to give the Lions real, meaningful tests before the internationals.

Future tours to Australia should maybe include playing Samoa and Fiji in the build-up to the Test series, but play them in Australia.

Paul O'Connell's inclusion on the tour after injury speaks volumes about what kind of influence he has on this group of players. To you, who was the most inspirational character that you served with on your Lions tours (it can be a member of the backroom team, physio, doctor, coach or player)? Someone who, when they spoke, you listened. Twadda

I have massive respect for all the guys I had the privilege to tour with, who made the commitment to do everything they could to find something extra. The beauty about a Lions tour is that everyone had a voice - should you chose to speak, there was no hierarchy.

All the captains - Finlay Calder, Gavin Hastings and Martin Johnson - were inspirational, plus the other natural leaders on the tours. Scott Gibbs has a special place for me, his words and performance were very inspirational during the 1997 tour of South Africa.

107 comments
Back to top
unknown