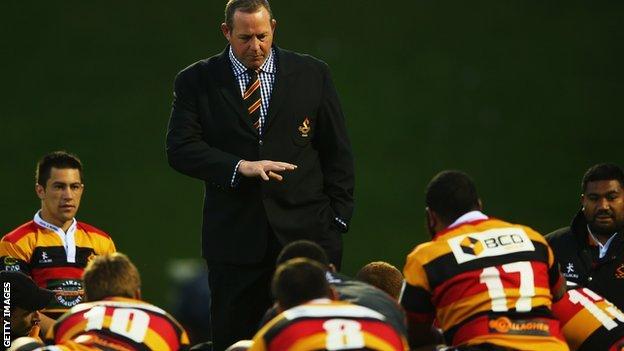 Like their four Welsh rivals, Ospreys operate under the financial constraints of a £3.5m salary cap.

"It strips away any of the unimportant things and makes you focus on what is absolutely fundamental to get the job done," Gibbes told BBC Wales.

The relative lack of money in the domestic game has been cited as a factor in the departure of a number of high-profile players from Welsh regions, including former Ospreys Mike Phillips (Bayonne) and James Hook (Perpignan).

In 2013-14 ex-Cardiff Blues centre Jamie Roberts and former Newport Gwent Dragons flanker Dan Lydiate will be at Racing Metro, while wing George North has joined Northampton from the Scarlets.

Gibbes says all he and his fellow coaches can do is their utmost to get the best out of the players at their disposal and within the budget available.

"We've gone through a bit of pain at Waikato as well," he said.

"Obviously the recession's dried up a wee bit of money that may have been around before.

"And again, at Waikato, we've really worked hard on developing players from within and really focusing on the young guys to bring them through.

"That's got its own set of challenges in that it takes a bit of time for these young guys to get the experience you want.

"You don't have the money, you can't buy the experience, so it's a matter of making sure your coaching structure's right.

"You get the right resources around them in terms of personnel and then you're basically driving the standards and the values that you want."

Gibbes says talking to former Ospreys and New Zealand flanker Marty Holah has given him confidence in what lies ahead in the 2013-14 season.

"Commitment and attitude to being the best that we can be is an expectation from me," added Gibbes.

"And from what I understand about the lads and Ospreys it's exactly what they are about.

"I had a good chat to Marty Holah about Ospreys and the environment that I'm going to.

"So with those two key ingredients involved I'm sure that things are going to go well."

Gibbes has also seen the Ospreys in action, witnessing their when his brother Jono was one a forwards coach with the Irish province.

"My brother coaches at Leinster and I spent a bit of time with Jono and the boys last year and was lucky enough to be at the RDS when Ospreys played Leinster in the Rabo12 final," he said.

"I don't know a whole lot about the Ospreys, but I do know that they were a very tough side."

Gibbes took over from former Wales captain Jonathan Humphreys, who left his role at the Ospreys to become Scotland's forwards coach.