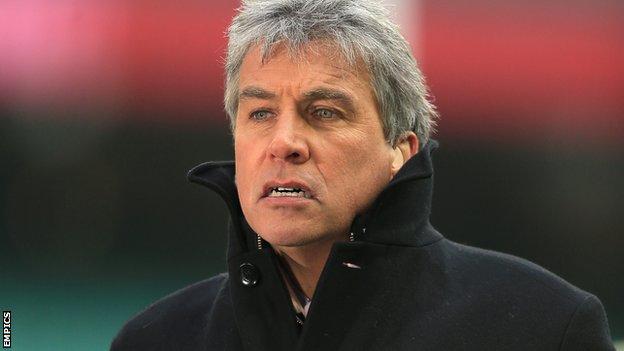 Esher chairman of rugby John Inverdale believes Worthing Raiders have the potential to reach the top flight of English rugby.

The Sussex side will play in National League One next season for the first time in their history.

The BBC presenter told BBC Sussex: "You could almost see Premiership rugby being played at Worthing with the right money invested there.

"It is an area crying out for that support and top-level sport."

He added: "They have fantastic facilities there."

Worthing is crying out for somebody to go in there, take it by the scruff of the neck and really make a big success of it

Head coach Kieron Dawson led Worthing to promotion last season and the former Ireland flanker has spoken of his ambition to continue progressing, while the club has tentative plans to move to a new ground.

With Sussex-born players Joe Launchbury, Joe Marler and Billy Twelvetrees gaining international honours and two group games at the 2015 Rugby World Cup to be staged at Brighton & Hove Albion's Amex Stadium, Inverdale says the profile of the game in the county is set to rise.

"Lots of top players have come from Sussex over the years and I'm sure the population of Sussex will be fighting each other to get tickets for those World Cup games," Inverdale continued.

"I think one of the great things that would happen to rugby would be a club from Sussex finding itself in the top two leagues.

"If you look at the population, the opportunities and the fact there is not a lot of top-level sport in the county, how brilliant it would be for Sussex to have certainly a Championship team.

"Haywards Heath dabbled with it a few years ago and didn't quite pull through.

"Worthing is crying out for somebody to go in there, take it by the scruff of the neck and really make a big success of it.

"There is bound to a rich person somewhere in Sussex who is a rugby fan. It is quite possible."

Meanwhile, Inverdale is wary that his club Esher, who are currently without a coach following the departure of Ollie Smith, may struggle to challenge for promotion back to the second tier when the new campaign gets underway.

"One thing about the future of Esher is it is hard to know how easy or difficult it would be to get back into the Championship because you simply don't know who is coming from beneath," he said.

"Promoted Henley had a crowd in excess of 3,500 at their last match of last season.

"That is huge support at this level. With clubs like that on their way up, it is going to be a very competitive league this year.

"I would never be churlish or stupid enough to say that we are going to go back up into the Championship.

"It is a long way from the start of the season but we are very aware it will be a tough old season.

"That's why we need to address the coaching issue sooner rather than later."