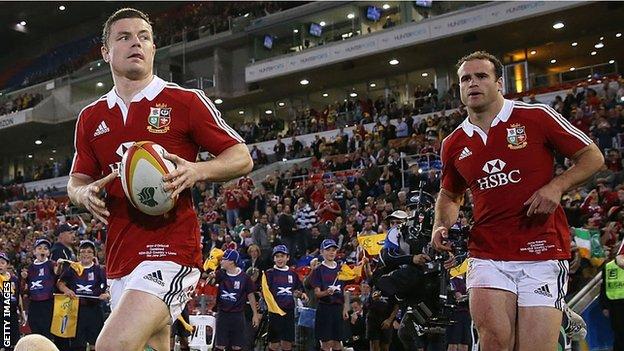 Jamie Roberts paid tribute to Brian O'Driscoll after the Irish centre was left out of the Lions team for the decisive third Test against Australia.

Roberts makes his first appearance in the Test team on this tour after recovering from a hamstring injury, but O'Driscoll is a shock omission.

"He was the first to come up to me at the end of training and say 'look, do you want to do any extras'," he said.

"I think it goes to show what sort of a guy he is."

By choosing to drop O'Driscoll, who does not even make the bench, Lions coach Warren Gatland has paired Roberts with his Wales team-mate Jonathan Davies in the midfield.

They are among 10 Welshmen in the starting line-up, which equals the record for the number of Welshmen in a Lions starting XV set in the first Test against Australia in 1950

"Warren has made some big calls and ultimately you respect the coach's decision whoever's picked," said 26-year-old Roberts.

"He's picked a team which he feels can win Saturday, whether that includes Brian O'Driscoll or not.

"A thousand people have said it before me and thousands will say it again he [O'Driscoll] is one of the greatest players to have played this game.

"He's an incredible player, he's an incredible asset to this squad and has played some wonderful rugby on this tour, but ultimately the coach makes the decision, he picks the players who he feels can deliver this Saturday."

O'Driscoll is on his fourth Lions tour and had been tipped to lead the side in Saturday's decisive third Test match in Sydney following the injury to tour captain Sam Warburton and with the series tied 1-1.

However, the Irishman will be watching from the sidelines with second-row Alun Wyn Jones captaining the side.

Roberts added that it was now the duty of the players to justify their selections by clinching a series win for the Lions.

He also paid tribute to the medical team who have aided his recovery since he picked up a hamstring injury in the match against the Waratah's on 15 June.

"I thought I was going home as soon as I did it, so full credit to the medical staff for keeping me on tour," Roberts added.

"I have to repay that faith on Saturday and deliver the goods."