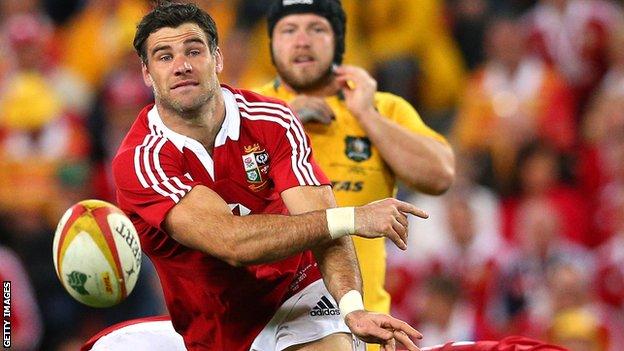 Mike Phillips says beating Australia on Saturday to clinch a series win for the British and Irish Lions would surpass all his other career achievements.

Scrum-half Phillips, 30, has won two Grand Slams with Wales, but is desperate to join a select band of players to have won a Lions series.

"This is unique, it's very special, it's every four years with an elite group of people," said Phillips.

"If we can achieve a series win on the weekend it would top everything."

Phillips helped the Lions to a 21-23 first Test victory in Brisbane, but a knee injury forced him to miss the second match as Australia's late comeback secured a 16-15 win to set up Saturday's decider in Sydney.

The injury has plagued 2008 and 2012 Grand Slam-winner Phillips throughout the tour, but he said: "I'm feeling really good now and hopefully I can go out there and perform.

Welsh Lions to roar in Sydney

"I'm delighted to be back in the side. It was different watching from the stands last week - different kind of emotions.

"But I'm pleased to have been given the honour now this week."

Phillips' inclusion is one of six changes made by coach Warren Gatland to the side in response to the second Test defeat.

The decision to drop Brian O'Driscoll to reunite fit-again Jamie Roberts with Jonathan Davies dominated the headlines, giving Wales a record-equalling 10 players in the starting line-up.

Gatland, who will return to his role as Wales coach after the Lions tour, has also given the captaincy to a Welshman as Alun Wyn Jones takes over the from the injured Sam Warburton.

"He's performed tremendously well on the tour as a player. He is a leader off the pitch and on it. He's captained Wales and the Ospreys a few times.

"He'll grow into the role and I'm very happy for him. He'll be leading from the front. He's aggressive but he's controlled. Hopefully we'll all back him up on the weekend and deliver a performance for him."

The Lions have won only one of their previous five tours, a 2-1 win over South Africa 16 years ago.

Victory over the Wallabies on Saturday would see the class of 2013 emulating the 1989 tourists by winning the final Test to clinch a series win on Australian soil.

While acknowledging the significance of what is at stake, Phillips recognises the need to contain the expectations and pressure as the week progresses.

"We know what's at stake but it's another rugby match," said the Bayonne player.

"We have to concentrate on ourselves and do the basics well.

"Obviously deep down we know how big it is but you've go to distance yourself from all that and concentrate on your own role and what's got you here in the first place."