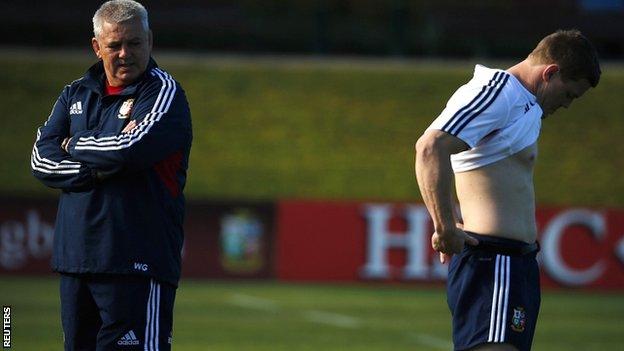 "When I go back to the UK and say 'Did I make the decision because I believed it was right, or did I make it because it was the right political decision?', I can put my hand on my heart and say I think it is the right rugby decision," Gatland said.

O'Driscoll, 34, was expected to take over the captaincy in the absence of the injured Sam Warburton, but failed to even make the match-day 23.

"It is only hard because you are making the decision by using your head and not your heart," added Gatland.

"Then you realise what comes of making a decision like that is all the periphery stuff, not the rugby decision, because it becomes a major story for 48 hours and a big debate.

"That is the process I have gone through.

"But I would hate to think we made calls based on trying to avoid any criticism or [gain] public popularity."

While O'Driscoll has almost certainly played his last game in a Lions shirt at the end of his fourth and final tour, Gatland was reluctant to indulge in tributes to a player who has opted to continue his career with Leinster and Ireland for another year.

"He is not finished yet," the New Zealander said. "He has been a big part of this tour.

"He played in the first two Tests, and he is obviously very disappointed as any player would be.

"Like everything, it is a learning process. It is quite hard when you have been number one in your position for 15 years and have been first choice in every team you have been part of.

"There are a lot of people who have experienced the disappointment of Brian always being selected ahead of them. It is just part of sport, isn't it?

"We have made a really tough decision, and that is part of it too.

"Brian has been around a long time. He understands how things work. He is a professional and he appreciated we had the conversation. We don't always speak to everyone [before announcing the team] but he was one that definitely needed the respect of being spoken to."

"He's a legend of the game," Deans said of O'Driscoll. "From our perspective it's a little bit of experience gone. We were anticipating he would play.

"It's not a surprise [Gatland has] gone to the Welsh players. He knows them well."

The furore over O'Driscoll's omission overshadowed a team selection that with the introduction of Roberts, Mike Phillips, Richard Hibbard, Alex Corbisiero, Sean O'Brien and Toby Faletau, sends out a clear signal that the Lions intend to subject Australia to a ferocious physical assault.

"You just wonder if they got a lucky bag and picked some names out. The Lions won the first Test and made eight changes to their squad. The Wallabies won the second and probably won't make any changes.

"The Lions lose by one point and there are six changes in the team and three guys on the bench who were nowhere near the team for the second Test.

"I was convinced Brian O'Driscoll should have been named as captain. It's catastrophic leaving him out. He's still one of the top centres in world rugby. He's a fantastic guy and has been on four tours and knows it all inside out.

"It's a massive mistake."

While the Wallabies neutered the Lions' expected set-piece strength in Melbourne and restricted their attacking game, Gatland does not believe they will be able to summon the same emotional intensity to the task in Sydney.

By way of example, the Lions coach recalled the time his Wasps side played Leicester in the last game of the regular Premiership season in 2005 at Welford Road, when Tigers legends Martin Johnson and Neil Back were playing their last game for the club.

Leicester won comfortably that day, but a fortnight later "they couldn't bring the same emotion and we put 40 points on them in the Premiership final," Gatland noted.

"It is hard to get yourself completely on edge every week.

"Australia had to be like that last week. You saw that with the reaction of [captain] James Horwill at the end.

"We think emotionally we can improve quite a bit. I would question whether they could do the same.

"Emotionally we will be there on Saturday, which is why we have picked a side that physically we think will dominate them."

1117 comments
Back to top
unknown