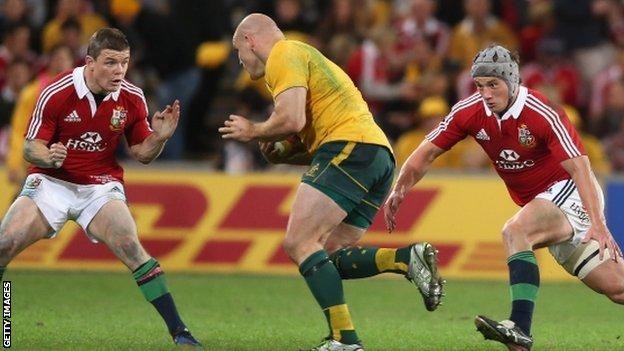 British and Irish Lions centre Jonathan Davies insists he feels no extra pressure to perform in Saturday's Test series decider against Australia after being selected over Brian O'Driscoll.

With the return of Jamie Roberts at inside centre, Davies switches to the number 13 jersey worn by O'Driscoll in eight of the Lions' last 11 Tests.

"I am just grateful for the opportunity to play in such a big game."

He added: "There is a lot of pressure on everyone. Everyone has to deliver. We are in the last chance saloon, and we have got to win it."

Davies revealed O'Driscoll, who was left out of the squad for the final Test of his fourth Lions tour, was swift to offer his congratulations despite his own disappointment

"Brian is one of the greats with what he has achieved in the game, and I was very grateful he came up and congratulated me," said Davies. "But that is the way the whole squad has been. Everyone has been very close and together."

Scarlets centre Davies has played 29 of his 36 Tests alongside Roberts for Wales, a national record, including all 10 matches in the last two victorious Six Nations campaigns.

They have also featured twice together previously on this tour, including against New South Wales a week before the first Test, a match in which the Lions played their most fluent rugby of the tour.

But for Roberts's hamstring injury against the Waratahs, coach Warren Gatland has hinted the Welsh duo may have even started the first Test together.

"It is obviously a benefit that I have played a fair bit with him for our country," said Davies, who started the first two Tests in the inside centre role which Roberts will assume on Saturday.

"Jamie brings something different. He is a big, physical presence, gets over the gain-line and he has also been working hard after training on his skills.

"I get to play [outside centre] where I have played a lot of my rugby over the last couple of years, so it is an exciting prospect."

Davies has played more minutes - 425 - on this tour than another player in the Lions squad, having completed all five Saturday matches and appeared as a midweek replacement against a Country XV.

He has already featured in a World Cup semi-final and two Six Nations title deciders, and insists the Lions will revel in the atmosphere of an 84,000-capacity crowd at Sydney's former Olympic Stadium.

"A lot of this squad are fortunate that they have played in big games before and we can draw on that and use it positively," added Davies.

"We just have to make sure we don't fear it. We have to embrace it and go out there to do the job."