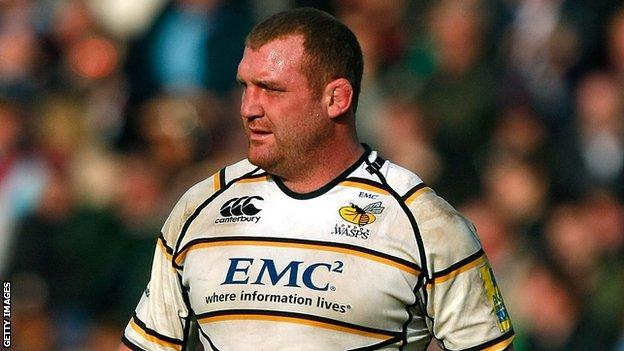 England and Wasps prop Tim Payne has been forced to retire with a neck injury at the age of 34.

Payne won 22 international caps after his debut against Australia in 2004, with his final England appearance coming against the same opposition three years ago.

He played 266 times for Wasps and was in the 2009 British and Irish Lions squad, but failed to play in a Test.

"I am gutted that I have been forced to call it a day," he said.

"I was injured towards the end of the season and not recovering from it wasn't something I saw coming, but I accept that is the nature of the game.

"I feel I have been hugely fortunate in my career to play in some great teams with great players and winning titles with Wasps is something I have immense pride in, alongside representing my country and the British and Irish Lions.

"I would like to think I will stay involved in the game and I want to thank all of the players and coaches I have worked with as well as my family, friends and supporters who have backed me throughout my career."

The Swindon-born forward represented Coventry, Bristol and Cardiff before joining Wasps in 2003, where we went on to win three Premiership titles and two Heineken Cups.

Wasps director of rugby Dai Young said: "Tim has been a superb servant to Wasps for over ten years and he has been an important player through good times and bad for this club.

"To play for one club over 250 times and to win domestic and European titles as well as playing for England and the Lions are all fantastic achievements and I speak for everyone when I say we wish him all the best in the next stage of his life."