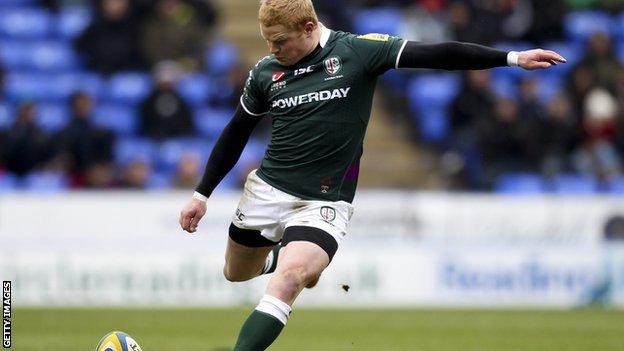 London Irish full-back Tom Homer wants his side to get off to a flying start in the new Premiership campaign.

The Exiles lost 10 of their first 12 league matches last term before recovering to finish ninth.

"It was very tough last season as we didn't get off to a good start, but I feel we've galvanised as a squad.

"We saw glimpses of what we are capable of at the end of last year so hopefully we can hit the ground running," Homer told BBC Radio Berkshire.

The Exiles will begin their 2013/14 campaign with a tough looking fixture against Saracens, who finished top of the Premiership table last season.

"We've got new players coming in this season and I feel we've become stronger," said Homer.

"I think we've got a very talented squad, a squad that's willing to put the hard graft in and that's been proved over the last month or so in pre-season.

"Everyone seems to be willing to go the extra mile to get better as a player and as a team."

One element Homer believes his side must improve is their discipline, despite being only the sixth worst in the division last year, with one red card and 12 yellows, behind Wasps, Northampton Saints, London Welsh, Gloucester and Worcester.

"Discipline is massive for us this season on and off the pitch and having just been away with the army, as a team we'll hopefully improve that.

"We've learnt from our mistakes and moved forward and it's all about the future now, we'll take each game as it comes," he added.