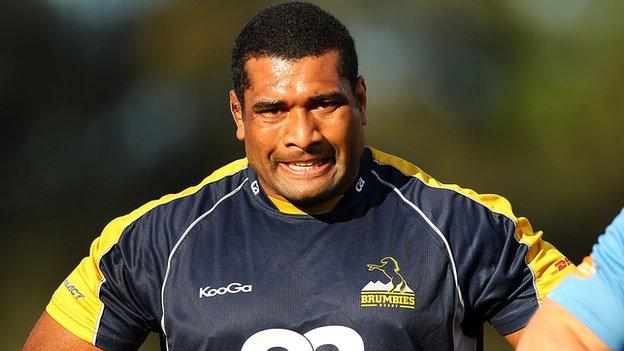 The 28-year-old, capped ten times for his country, will arrive at Scotstoun later this month.

Yanuyanutawa was previously with London Irish, featuring on 21 occasions for them last season.

"He is an extremely powerful and mobile prop, who will give us another option in the front row," said Warriors head coach Gregor Townsend.

Yanuyanutawa revealed that he had asked compatriot, and now team-mate, Niko Matawalu about life in Scotland.

"I've spoken to Niko about the move and he says it's a good club, with a great bunch of boys and a good coaching system," he told the club website.

"He's really enjoying it so I'm sure I will too.

"I'm very excited about joining Glasgow and I'm looking forward to playing in the RaboDirect PRO12 and Heieneken Cup next season.

"I've always wanted to play in the Heineken Cup and I didn't get that opportunity last season with London Irish. It's the pinnacle of European rugby, like being in Super Rugby in the southern hemisphere.

"To get the opportunity to play against Toulon in the Heineken Cup next season would be unreal."

The former Brumbies forward is the second player to sign for Warriors this week after South African flanker Tyrone Holmes joined on Tuesday.