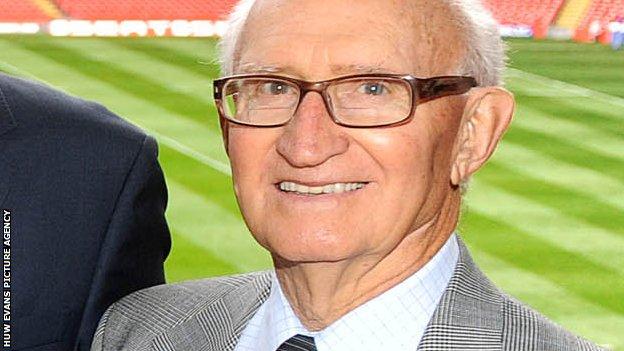 Brace led Wales twice in 1960 and 1961, winning both matches against Ireland, and represented his country nine times.

The diminutive scrum-half, born in Pontarddulais, made his Wales debut in 1956 in an 8-3 win over England at Twickenham.

Having played for Aberavon and Newport, Brace ended his club career at Llanelli, where he was captain for the 1958-59 and 1960-61 seasons.

The Cardiff and Oxford University graduate enjoyed a distinguished career in broadcasting, and succeeded former Wales and British and Irish Lions captain Cliff Morgan as head of sport at BBC Wales.

Morgan was Brace's half-back partner for Wales when he made his international debut.

"As Head of Sport at BBC Cymru Wales during the 1970s and 1980s, Onllwyn played a leading role in shaping our sports coverage at a time of major advances in live broadcasting," he said.

"He's warmly recalled as a hard working and innovative leader, setting the highest standards, and much loved by his colleagues.

"He took change in his stride - leading from the front and inspiring his colleagues, just as he had done on the playing field."

Former Wales and Cardiff fly-half Gareth Davies also paid tribute to the man he succeeded as head of sport at BBC Wales in 1989.

"Onllwyn was a very dynamic and a very clever individual both in his playing days and following that," Davies said.

"He was very instrumental in my career. He was the one who suggested that I applied to do my post-graduate course at Oxford University where he went.

"From a working point of view I took over from Onllwyn as the head of sport for BBC Wales. Those situations can be difficult but he was always there ready to offer advice.