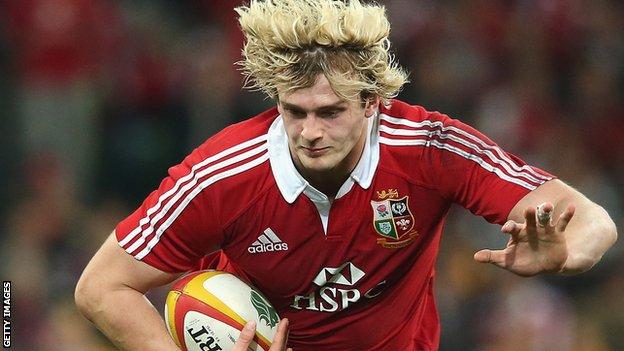 Former Lions coach Jim Telfer has been disappointed to see Scottish players passed over for the Tests in Australia.

But the first two Tests passed without a Scot touching the ball, as the series goes down to a decider on Saturday.

"I am surprised because each one of them has done very well when they've been on the field," said Telfer of the Scots in Warren Gatland's squad.

"Scotland did reasonably well in the Six Nations and probably should have had more players in the touring party."

Winger Maitland, 24, was an unused replacement in the opening 23-21 victory in Brisbane, with prop Grant, 27, suffering the same fate in the following 16-15 loss in Melbourne.

This time, lock Gray, 23, is the sole Scot among the replacements for the final Test in Sydney, meaning the last Scot to start a Lions Test was Tom Smith in 2001.

Gray's fellow second row Paul O'Connell has been absent since fracturing his arm in the first Test.

"The one, for me, closest to selection is Richie Gray after the loss of O'Connell, who was always going to be the number one second row," Telfer told BBC Scotland.

"And I think Ryan Grant has been very unfairly dealt with because he's a better scrummager than Mako Vunipola."

England international Vunipola came on as a replacement in the first Test before starting the second.

Telfer, 73, was Lions head coach on the tour of New Zealand in 1983 and was an assistant on the winning 1997 trip to South Africa.

He also made six Lions appearances in the back row in the 1960s.

"I'm disappointed by the lack of our players in the 23," added the former Scotland coach.

"Stuart Hogg was the player of the tour in the early stages.

"But the opposition against them in each position is strong and you can't say 'Well he should be in instead of that player'.

"Hogg and Maitland cannot be too disappointed about not being in the XV. But whether Hogg's versatility could have been used in the third Test is open to debate because he adds a spark when he plays.

"There hasn't been much spontaneity about the backs.

"The Scottish boys will be disappointed but it will give them an incentive and they are young and will have learned on the tour."

For the final Test, Gatland has named 10 Wales players in his starting line-up.

"Ten Welshman is not a problem for me," added Telfer. "You must remember Wales beat England by 30 points in the last game of the Six Nations and played very well.

"Without being critical, I think that when you have a management of Welsh and English coaches there has been a tendency to go for players they know."

The decision to drop experienced Ireland centre Brian O'Driscoll has been widely criticised and Telfer thinks Gatland's choice is a gamble, particularly with captain Sam Warburton and former skipper O'Connell out injured.

"O'Driscoll is a bit more conservative now that he's older but he still does the right things at the right times," said Telfer.

"He's the third most obvious leader and you need that mental toughness - in the last 15 minutes in particular. He will be missed.

"When you're absolutely knackered I don't think [captain] Alun Wyn Jones is the man to inspire you."

The pressure on New Zealander Gatland is huge going into Saturday but Telfer knows all too well that the arguments over tactics and selections will be quickly forgotten if the tourists are successful.

"It will be taken into consideration that Australia is probably the easiest of the southern hemisphere countries to win in.

"But it's been 16 years since the Lions had a winning series."

Telfer would not be drawn on a prediction but is expecting another tense encounter after the nail-biting nature of the previous two Tests.

"There will be great nervousness," he said. "It doesn't matter how battle-hardened you are as an international player.

"When you play for the Lions and you are still in the mix with regards to the series then you are very conscious of the fact that, if you win, you go into the history books.

"The teams are very well matched and that's the way it should be.

"Both sets of supporters, players and management have everything to play for and there will be one very disappointed and one full of joy."

458 comments
Back to top
unknown