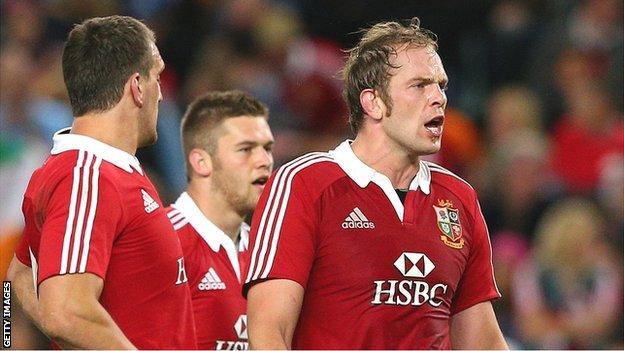 Richard Hibbard is backing Alun Wyn Jones to skipper the British and Irish Lions to victory over Australia in Saturday's deciding third Test.

Lock Jones takes over the captaincy from injured Welsh compatriot Sam Warburton for the showdown in Sydney.

"He's a real, true leader... Al's inspiring, on and off the field. He's a true professional, it doesn't get much better than him," Hibbard said.

"On the field he leads from the front, I've never seen anyone like him - he's an absolute machine.

"And off it he's looking at the line-out details, scrum details, talking to the backs, interlinking the backs to the forwards.

"Everybody knows that Al will die for the cause, Al is going to be the first man wanting to make that tackle, that first carry. Everybody is behind Al and really supporting him."

Lions coach Warren Gatland has made six changes to the side beaten 16-15 in the second Test in Melbourne.

Hibbard starts at hooker in place of England's Tom Youngs, who also began the 23-21 first Test victory in Brisbane, with the Welshman on the bench each time.

Now handed the number two shirt, Hibbard hopes to make an even bigger impact in a game he believes will be the biggest of his career so far.

"It doesn't get much bigger, this type of series decider," said the 29-year-old Neath product.

"I played in the [Six Nations] Championship decider at the beginning of the year and that was big enough, and I think this has stepped up a touch.

"There's a great feeling: we know what's at stake, we know what we can do, we can go in the history books.

"There's a big focus on the game and we want to play well, play with smiles on our face and get the series win."

There has been some criticism of the tourists' set-piece but Hibbard is reasonably happy with how the Lions eight have performed so far and says the pack have more to give.

"You get that perceived image of the Lions not working too well but it's a big focus, set piece is massive for us, it's where we can build our platform," Hibbard added.

"Scrums and line-outs we definitely want to go well there and really dominate.

"We've still got a couple more notches to go up and hopefully everything comes together on Saturday and we really perform.

"It's pretty much like a duck: everything is calm on top but the feet are going mad underneath! That's what it's feeling like at the moment... it's just looking at the details now ready to go into the game."