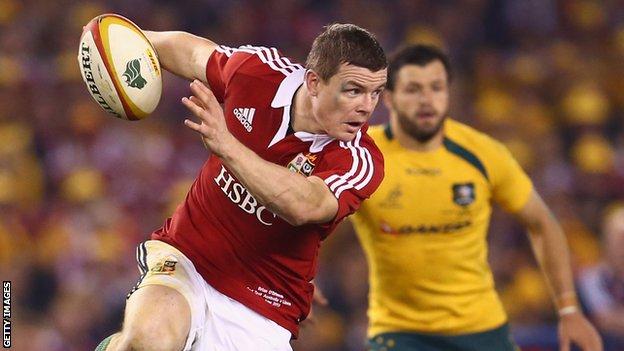 British and Irish Lions legend Sir Ian McGeechan has said he would have picked Brian O'Driscoll for the final Test because of his leadership skills.

The decision to drop the veteran centre has been hotly debated ahead of Saturday's decider with Australia.

"I would have kept him, simply because of the leadership and responsibility that he takes," the 66-year-old, four-time Lions head coach told BBC Sport.

The Test series is currently tied at one game apiece after the hosts replied with a 16-15 second Test victory following the Lions' 23-21 win in the opener.

After captain Sam Warburton was injured in the defeat at Melbourne, O'Driscoll was seen as his likely replacement as he has led sides at international level on a world-record 84 occasions - in 83 of his 125 Tests for Ireland, plus the first Lions Test in New Zealand in 2005.

However, the 34-year-old was instead dropped by head coach Warren Gatland as he made six changes to his side for the match in Sydney, a choice labelled a "terrible mistake" by ex-Lions hooker Keith Wood.

"Alan Wyn Jones will have to have his moments when he pulls the players together on the field," McGeechan told the BBC's chief sports correspondent Dan Roan.

"As a coach, you can be sending messages on, but you need those moments when everybody is together.

"He will have to take responsibility for that. Jonny Sexton has a big responsibility as well to play the game in the right areas, and if necessary, make some big calls and have some confidence to do that."

McGeechan believes the choice to drop O'Driscoll is all the more surprising because of the return to fitness of Jamie Roberts.

In 2009, when McGeechan was head coach, the pair had enjoyed a fruitful partnership in the centres, albeit in a losing cause as the Lions lost the Test series 2-1.

"They do understand each other, they have a very good chemistry, and with 80 minutes to win a Test series that combination could have given us some special moments."

McGeechan was in charge the last time the Lions won a Test series, when they triumphed in South Africa 16 years ago, and he believes Saturday's match at Sydney's ANZ Stadium is the tourists' most important game since that victory.

"For the Lions and what they stand for, it is the biggest game since 1997," he said.

"There is a Test series to win, and from our perspective, that is very important."