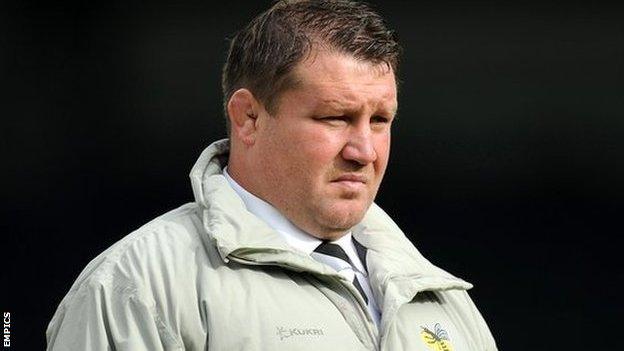 Wasps open their campaign against Harlequins on 7 September and have begun pre-season training early.

Young said: "We had plaudits for picking young players but at the end of the day we finished eighth.

"Players have put themselves in the limelight, but the next target is proving they can do it week in, week out, and that there's more to come."

Speaking at the launch of the 2013/14 Premiership fixture list, Young said a lack of consistency was one of the reasons he had begun preparing for the forthcoming season earlier than usual.

"We are determined to hit the ground running because we had a poor start last season, an excellent middle part of the campaign, and we fell away badly towards the end," he told BBC Three Counties Radio.

"First and foremost, we want to have a solid pre-season, so we start well.

"We've added a couple more players so we have a little more more strength in depth, so hopefully we can maintain that consistency - we don't have to over-play players."

Young acknowledged the decision of experienced international prop Marco Wentzel to return to South Africa last month had left the club struggling to find an alternative.

"Marco going was a bit of a shock and disappointment," he said.

"It pretty much left us in the lurch, but there's nothing we can do about him going back to South Africa for family reasons.

"We could do with a little bit of experience, and we've looked, but at this stage of the season you can imagine how difficult that is.

"We will certainly bring in one or two. Whether they'll be experienced, probably not, but where one door closes another opens. It gives opportunities to others and it's where I've got to earn my money.

"Age isn't a barrier with me. If we want to keep achieving over the long term we have to build on the youngsters.

"It won't happen overnight for us and I have to have the courage of my convictions - to pick them and promote them, but then have to take the rough with the smooth, because that's what you get with youngsters."