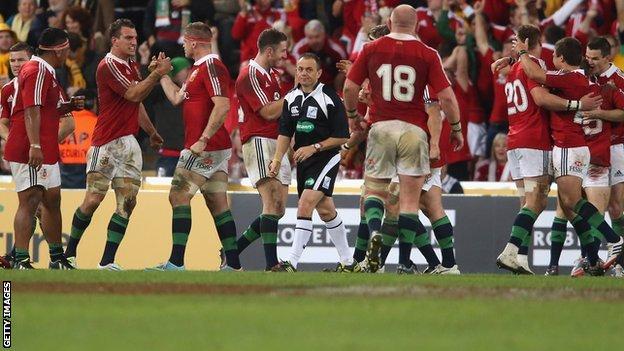 Do or die. Last-chance saloon. Winner takes all. Last throw of the dice. The biggest game of our lives.

The cliches have come thick and fast from a range of British and Irish Lions personnel in recent days as they contemplate Saturday's series decider against Australia.

After two Tests settled by the last kick, and winning margins of two points and one, the pre-match hoopla for the final instalment requires little by way of imagination.

No-one would be too surprised if the match ended in a draw, which would be a first in 122 years in a three-Test Lions series with the outcome still on the line.

It is difficult to know who will be more nervous heading west to the Olympic Park in Homebush from Sydney's city centre in the hours before Saturday's 2005 kick-off.

At least the 30,000-40,000 Lions fans making up the famous sea of red will have alcohol to sooth the jangling nerves.

After their get-out-of-jail victory in Brisbane, and the heartbreak of a late defeat in Melbourne, it is not hard to decipher the feelings of players who have already had to digest the furore surrounding Brian O'Driscoll's shock omission from the side this week.

Wing Tommy Bowe spoke of the "huge amount of emotion in the squad at the minute" as the Lions wrapped up their final training session at a sun-dappled North Sydney Oval on Friday.

And that is before they set foot inside the former Olympic Stadium.

Ever since Cathy Freeman sent 110,000 spectators into a dizzying frenzy with her gold medal run in the 400m at the Sydney Games, the arena has been synonymous with sporting drama, with rugby leading the way.

There was "The Great Test" - as it is known here - of 2000, when Jonah Lomu's late winning try for the All Blacks snatched a 39-35 win over a Wallabies side which had recovered from 24-0 down by half-time, in front of a record Australian rugby crowd of 109,874.

The stadium was reconfigured to its' now 84,000 capacity by the time the Lions lost the 2001 decider there 29-23. A few months later Toutai Kefu's last-ditch try against New Zealand sealed another remarkable Australia win, 29-26, to send the great John Eales into retirement.

Ten years on from that staggering high, can the Lions write a glorious, fresh chapter in the history of British sporting success down under?

Some in the home nations are aggrieved that for this defining match, 10 of the 15 red jerseys are filled by Welshmen, as the emotional fall-out from the dropping of O'Driscoll continues to reverberate.

"Everyone knows the disappointment he has had," said Bowe, one of three Irishmen - plus two Englishmen - who complete the starting XV.

"He has such a presence around the squad. For him to be rallying around the team, to really want us to push on to win the series, is a huge motivation for us to go out and do the job for him as well. He wants us to win for the Lions, more than anything."

O'Driscoll is acutely aware it has been 16 years since the Lions won a Test series, the Irish legend having played in the last three - failed - attempts.

Amid his shattering personal disappointment, he has devoted himself to ensuring those with the opportunity to end that demoralising sequence take it on Saturday.

Jamie Roberts, whose return to fitness precipitated the axing of his 2009 centre partner, is adamant the nationality issue is a sideshow.

"Look, this isn't the Wales team, it is a Lions team," he said. "It just happens that [head coach] Warren [Gatland] has picked quite a lot of Welsh players in it. By no means are we playing like Wales at all. We are playing quite a bit differently actually. He obviously just thinks that this week the players he has picked can do the job."

And if they do it as effectively as the Wales side which dispatched England by a record margin to win this year's Six Nations title, will anyone still be complaining?

In introducing Roberts, hooker Richard Hibbard, flanker Sean O'Brien and number eight Toby Faletau, and recalling scrum-half Mike Phillips and Alex Corbisiero at loose-head prop, Gatland has made no secret of the fact he wants his side to physically dominate Australia.

The motivation of abrasive big hitters like Hibbard and Phillips, plus those unfortunate not to be more involved until now like O'Brien and Faletau, should also galvanise the Lions.

Not forgetting they will be a led by a player in Alun Wyn Jones described by club and country team-mate Hibbard in a recent TV interview as "flat-out psycho".

"The word I'd use is desperate," said assistant coach Graham Rowntree as he contemplated the eve-of-match mood in the camp. "We really want this game tomorrow. Seeing how we've trained all week, crikey we're ready for this battle."

Last week it was the Wallabies in desperation mode. Gatland doubts whether they can summon the same emotional intensity on successive Saturdays.

His Australian counterpart Robbie Deans, unsurprisingly, sees it differently. "This will be our best performance, without a doubt," he said. "I certainly hope we can conclude this series emphatically."

While Gatland has gambled on leaving out his most experienced player, Deans has also rolled the dice in recalling his.

George Smith will become the first Australian to play in two different series against the Lions when he wins his 111th cap on Saturday, four years after his last, and 12 years since his sixth as a raw 20-year-old when the Wallabies clinched the last Lions series in the same stadium.

But the celebrated flanker hasn't played a competitive game since damaging knee ligaments seven weeks ago.

No-one disputes his enduring class, particularly at the breakdown contest, but it was no surprise to hear Rowntree pondering whether his fitness will hold up in a game Deans anticipates will be "fast-paced and highly physical".

Smith may not last the full 80 minutes, with Michael Hooper poised to spring from the bench, but his battle with Lions open-side Sean O'Brien - replacing injured captain Sam Warburton - will be critical.

That will be one of many individual battles that will shape what could be a match for the ages.

"Bar maybe a World Cup final, there is no bigger stage to play on than a deciding Lions Test match," said Roberts.

"You just have to get completely excited about it, not shy away from it, not get nervous. It is just pure excitement. You have to go out and express yourself, keep your concentration and deliver under pressure. We have a golden opportunity now. I am massively looking forward to it."

He's not the only one. Strap yourselves in for Part Three: Showdown in Sydney. If your heart can take it. It should be a hell of a ride.