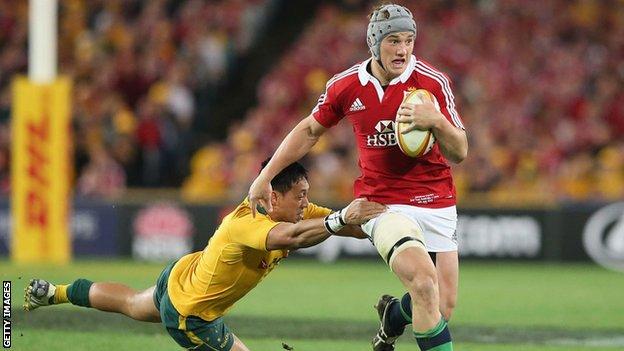 Jonathan Davies is proud to have been part of "something special" after helping the British and Irish Lions to a 2-1 Test series win over Australia.

Davies played a pivotal role in the second Lions try as they in Sydney.

The Scarlets centre was controversially included at the expense of Brian O'Driscoll, but that was forgotten after the heat of battle.

"All the effort we've put in as a squad over the past eight weeks and it's come down to that and it's something special I'll never forget."

Davies claimed the controversy over coach Warren Gatland's decision to omit Irish legend O'Driscoll from the team had not distracted the players during the build-up to the match.

"The big thing we said this week was that we [knew we] hadn't played any rugby the first two Tests," said Davies.

"We knew we were capable and [if we] took chances that came about we could really perform and we did that.

"And just to be a part of that you know is something very special."

Davies played inside centre in the opening two Tests, but was switched to outside centre after his Wales midfield partner Jamie Roberts recovered from a hamstring injury.

And 25-year-old Davies paid tribute to two facets of the Lions game which he felt were decisive - the pack, and the brilliance of full-back Leigh Halfpenny.

"I think all tour the forwards have been superb," Davies said.

"They've shown dominance in every game and [in Sydney] it was the same again. It's great to play behind all that, so credit to them.

"And behind [the scrum] we had chances and we took them."

Halfpenny scored a Lions Test record 21 points in Sydney and claimed 49 points in the series - another record.

He also helped create tries for Jonathan Sexton and George North and was named man of the series to add to the Six Nations player of the tournament award he also won in 2013.

Davies was quick to add to the list of plaudits being heaped on the Cardiff Blues full-back.

"Credit to him, he's probably one of the most hard-working people I've ever seen," added Davies.

"He works so hard on his positional play and he has to take the goal kicks as well. He's been outstanding all tour and he deserves that [to be named man of the series]."

Wales 2012 Grand Slam-winner Davies also hopes that a first series win in 16 years will lay to rest claims that the Lions concept is out of step with professional rugby.

"This series just shows the importance of the Lions," said Davies.

"It happens every four years and we're part of a small bit of history.

"The boys have worked pretty hard for it and I think it's something very special and long may it continue."

405 comments
Back to top
unknown