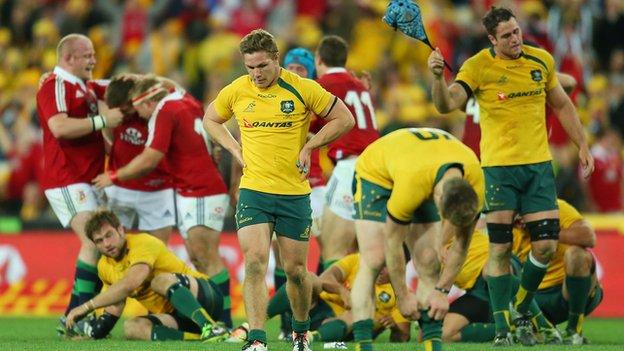 Australia captain James Horwill believes too many errors early in the decisive third Test against the British and Irish Lions cost them a series win.

The hosts were chasing the game after only two minutes when Alex Corbisiero touched down, before Leigh Halfpenny kicked four penalties.

Australia fought back just before the break but the Lions took control in the second half for a dominant 41-16 win.

"We had too many errors early on and we gave them a head start," said Horwill.

"We started the second half like we wanted to start the game and then we let them get away with it and they were too good.

"We dug deep and we tried as much as we could. I'm very proud of every single one of my players, but in the end you would have to say that the better team on the night won."

After losing the second Test 16-15 in Melbourne, Lions coach Warren Gatland said training in the build-up to the final Test had been focused on improving set-pieces, particularly their scrum.

That work paid off as the Lions won all 10 of their scrums, while Australia managed just three of their six.

"We just had to hold onto the ball and build pressure and we didn't do that," added Horwill.

"We let them into the game and we let them execute the way they wanted to and they scored points.

"It was a bit disappointing from us in the scrum. We'd done so well in the first two Tests but we let ourselves down there a bit. We've got to work on that."

Australia coach Robbie Deans admitted he was unsure about his future in the wake of the thrashing.

After five years in the role he has been coming under increasing pressure and when asked about remaining as the Wallabies' first foreign coach, the New Zealander said: "You don't presume anything in this industry. Those decisions are made by others."

"We'll review everything at the end after this. Five minutes after I've played a Test match is not the time to talk about coaching positions."