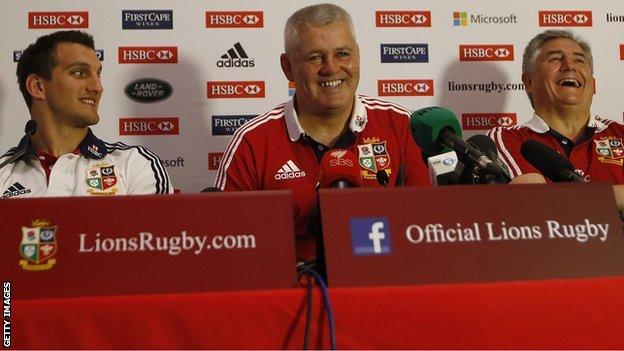 Warren Gatland would consider carrying on as British and Irish Lions coach for the series in New Zealand in 2017.

The Kiwi guided the Lions to a first series win in 16 years as his side beat Australia in a three-Test contest.

"Winning a couple of Grand Slams with Wales and reaching the semi-final of the World Cup has given me this opportunity," said Gatland, 49.

"I'm grateful for the chance and if it came up again then it's something I might look at."

The Lions beat the Wallabies 41-16 in the deciding third Test to win the series.

Australia mounted a comeback to reduce the deficit to three points at one stage in Sydney's ANZ stadium before Gatland's side responded by surging clear in impressive fashion.

Former Wales and Lions player Gareth Edwards believes Gatland deserves to carry on in the role.

"He has got to be the main contender," he told BBC Radio 5 live's Sportsweek.

"I was surprised Brian O'Driscoll was not in the side albeit he had not played like the player we know. It has been nullified by the result.

"A lot of people can argue about him [Gatland] but he doesn't deviate too much.

"He's got the best credential of all in that he is a winning Lions coach."

Whether he will be in charge for the next series in his homeland or not, Gatland would like to see some changes made to the Lions coaching structure.

"The Lions are something that we need to preserve for the modern game," he said. "It's special and it has been a privilege for me to experience it.

"It's tougher than it was in South Africa four years ago because the game's becoming more and more physical.

"It's tough to put two games together, so maybe you need a break in between games to rejuvenate yourself.

"It's important that the Lions and home unions get together to agree adequate preparation time.

"The season needs to be adjusted so that we can spend a couple of weeks in the UK preparing properly. The Lions need to be given the best possible chance to be successful for the future.

"New Zealand is harder from a logistical point of view. It wasn't until I left there that I realised what a difficult country it is to tour because getting around is more challenging."

706 comments
Back to top
unknown