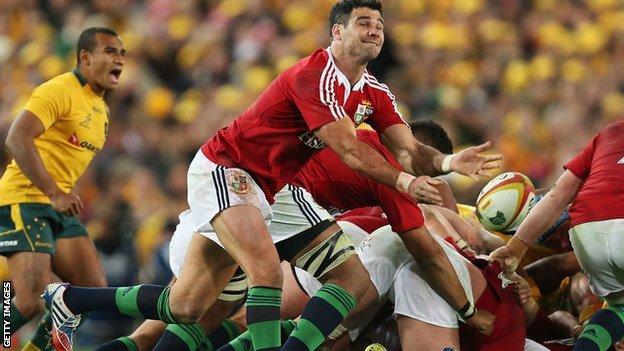 Mike Phillips admits he is considering his future as an international player after helping the Lions to a 2-1 Test series win in Australia.

The 30-year-old scrum-half has one year remaining on his contract with Bayonne.

And in a column for the Mail on Sunday Phillips says clubs might not sign him if he is still playing for Wales.

"It may well be that if I want to play on at club level, I'll have to call time on my international career... in the not too distant future," he said.

Did you know? The 6ft 3in Phillips played his early rugby as a flanker before switching to scrum-half

"It's something I'm going to think long and hard about and I've got some decisions to make in the next year."

Phillips made his fifth Lions Test appearance in the 41-16 win over Australia in Sydney, which clinched a first Test series victory for the Lions since 1997. He played in all three Tests on the Lions' last tour, of South Africa in 2009.

"If [Saturday's match] is to be the last game of international rugby that I play, then what a way to bow out.

"Added to that, Wales fought back to win the Six Nations last season. Who knows? I'm just glad it's the end of the season now and I can enjoy it."

Phillips has won 77 caps for Wales and was a key member of the teams which won the Six Nations Grand Slam in 2008 and 2012, and retained the championship in 2013.

He will have a scan on a knee injury on Monday and is likely to need a "small operation" to rectify a problem which hindered him throughout the tour.

The farmer's son from Bancyfelin in Carmarthenshire missed the second Test in Melbourne, with coach Warren Gatland saying the injury was a factor.

However, Phillips started the decisive third Test and played a key role in the build-up to Alex Corbisiero's second-minute try, before being substituted in the second half.

He said: "I won't be on the next Lions tour, but five caps and three wins? I'm happy with that."