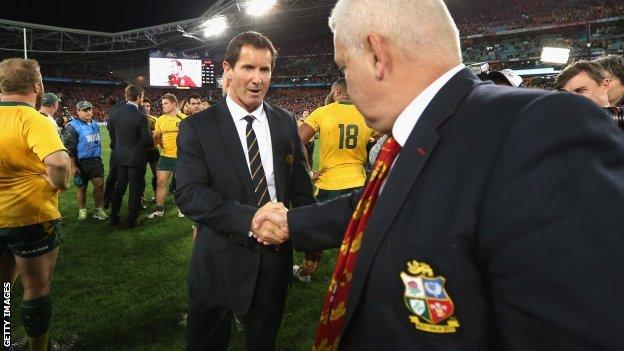 Robbie Deans has resigned as coach of Australia following the 2-1 series defeat by the British and Irish Lions.

He has been replaced by Queensland Reds boss Ewen McKenzie.

New Zealander Deans, 53, was appointed Wallabies coach in 2007 and was contracted until the end of the year.

Australian Rugby Union said in a statement: "Qantas Wallabies head coach Robbie Deans has announced this morning he is stepping down from the role effective immediately."

Deans said: "I wish to take this opportunity to thank everyone involved in Australian rugby for their support through the duration of my tenure. It has been a rewarding five years and I am proud of all that we have achieved.

"Most especially, I would like to thank the players for their efforts and wish them all the best going forward."

To coach the Wallabies is a huge honour

Ex-Australia prop McKenzie was assistant coach of the victorious Wallabies for the 2001 Lions tour.

ARU chief executive Bill Pulver said: "Robbie resigning in the wake of the Lions Tour did not catch us unprepared to move forward with a replacement.

"Having established the necessary criteria, and spoken to the relevant people, we were convinced that Ewen was now the man to take the Wallabies forward.

"His opportunity comes forward quickly, with the Rugby Championship and the opening match of that competition - the Bledisloe Cup showdown with the All Blacks on 17 August."

McKenzie added: "To coach the Wallabies is a huge honour and also a special opportunity to lead a team that I've enjoyed many great experiences with in the past as both a player and coach."

158 comments
Back to top
unknown