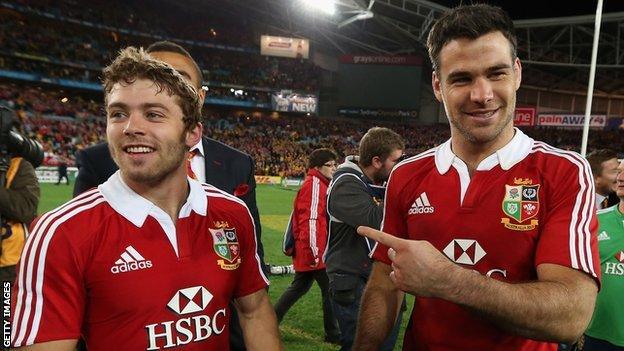 Phil Bennett says Wales' 2013 British and Irish Lions stars will not be intimidated by any nation at the in the wake of the 2-1 Test series win over Australia.

Eleven Welshmen played in with full-back Leigh Halfpenny named man of the series.

Bennett says Halfpenny has joined the list of Lions "greats".

"What a chance for this Welsh side [at the 2015 World Cup]. They're not frightened any more," said Bennett.

"We don't get bullied by big South Africans or the New Zealanders. We can stand up to them now."

Bennett starred at fly-half for the 1974 Lions on their invincible tour to South Africa and led the tourists in 1977 to New Zealand, where they lost the series 3-1.

He says Warren Gatland, who now returns to his role as Wales head coach, has forward power and a back division to make a serious bid for glory at the 2015 tournament that will be hosted by England.

Wales' group at the 2015 World Cup will include the hosts and Australia, with Gatland's side to face the Wallabies at Twickenham.

"Alun Wyn deserves the highest praise for letting all the furore not get to him and lead the side to a magnificent victory.

"Warren Gatland - he took some stick [over Brian O'Driscoll's omission]. And let me tell you, had we lost on Saturday, I don't think he'd have been allowed in Dublin for the rest of his life, and many other places.

"We've had some great Lions calling him everything. He put his head on the block. I still would have had O'Driscoll on the bench instead of Tuilagi because he's a better player.

"But he [Gatland] deserves all the credit in the world, quite outstanding."

Lock Jones had taken over from injured tour captain Sam Warburton for the final Test.

"We've got so much talent in Wales, but this was a Lions performance," added Bennett.

"[Alex] Corbisiero, an English prop, added to that - he was magnificent.

"But we should be so proud that we've got men of that calibre in Wales and they're going to be truly outstanding and roll on 2015 and the World Cup.

"He must be looking at this side and saying 'look what I've got in front of me'."

Bennett added: "He'll end up going back to New Zealand as Sir Warren - I can see it now."

However, Bennett says Halfpenny's positional play and attacking qualities - he helped create two of the Lions' four tries - have put him on a par with legends such as Wales scrum-half Gareth Edwards and former Irish Lions Mike Gibson and Willie John McBride.

"Let's forget about his goal-kicking for a minute," said Bennett.

"The way he counter-attacked in the second half was outstanding, beating people, quick feet, feeding people in and outside of him and then they scored the tries.

"But the best thing of all was his positional play. He was like a magnet. The ball was coming to him at everywhere he went.

"He read their [Australia's] kicking game, which wasn't great… [New Zealand's] Dan Carter will test him a little bit more.

"But Leigh Halfpenny... deserves all the credit in the world.

"We look back at the greats - Gareth Edwards, you can name them, roll them off, Mike Gibson, Willie John McBride, and they were greats in their era.

"Now Leigh Halfpenny is a great in this era; he's a world class player. I think he's going to get even better.

"His positional play will get stronger... but when he's up against a player like Dan Carter or a Ronan O'Gara [ex-Ireland fly-half] at his very best, he'll say 'well, I've got to read this game'.

"But he doesn't miss a kick at goal, he's so brave and how he's added an attacking game, which was quite beautiful to see... he's got it all."

415 comments
Back to top
unknown