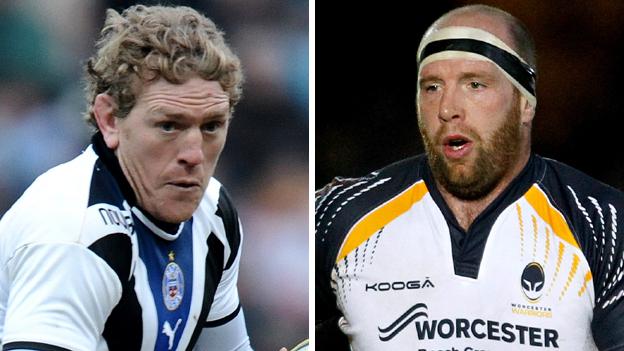 Twice-capped former England utility back Vesty, 31, has moved to Sixways as academy transition manager following his end-of-season release by Bath.

Prop Jones, 36, who has two caps for Wales, has been appointed scrum coach.

He is currently undergoing long-term rehabilitation after an Achilles injury suffered against Saracens last season.

The arrival of the pair follows the appointment of Gloucester's Carl Hogg as head coach and the arrival of former Edinburgh flanker Simon Cross as their new defence coach.

"I want Worcester to be creating and developing the next generation of talented young coaches and see that as vitally important to the future of the club," said Ryan.

"Both Sam and Ceri are taking their first steps into coaching and are eager to make a positive impression. They have lots of experience to pass on and I know both will work tirelessly for the Warriors."

Vesty played 157 matches for his home town club Leicester before his 2010 move to Bath, for whom he made 64 appearances.

Jones has so far played 27 games for Worcester since signing from Harlequins in 2011.

The vastly experienced forward made over 200 appearances for Quins after starting his career at home town club Newport.