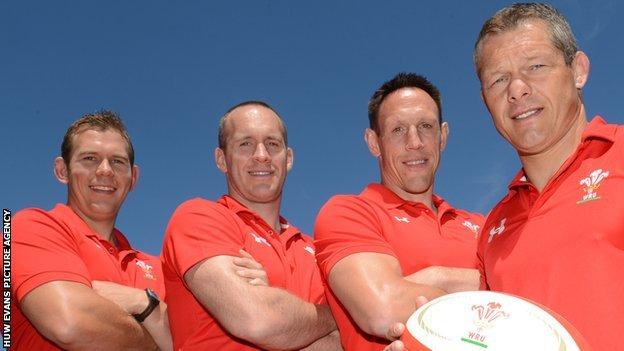 Wilson guided his side to second place at the 2013 International Rugby Board Junior World Championship, where they

"It's... a big pair of boots to fill on the back of reaching the Junior World Championship final," said Hayward."

Scarlets assistant coach Wilson's contract has ended and he will concentrate fully on his Parc y Scarlets job.

Wilson said: "It has been great for my personal development as a coach - the experience has certainly put me on the next step of the coaching ladder - and I've worked with some very good future Welsh internationals."

He moved into coaching with stints at the Steelmen and Sale Sharks before joining the Welsh Rugby Union's academy set-up.

"Pressure comes with success and that's what you thrive on as a coach," added Hayward.

"I don't see any reason we can't reach the last four again next year if we keep working hard with the new group of players and if we do that, anything can happen as we saw in France - and South Africa last season [2012]."

Cunningham arrives via his forwards coaching role with Wales U18.

"He coached Ebbw Vale before moving to Sale Sharks and for the past two years he has been a WRU academy skills coach working with the best young players in the Dragons region and as Wales Under-20 attack coach."

6 comments
Back to top
unknown