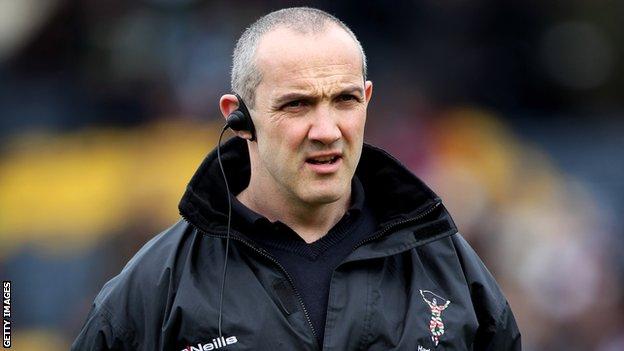 Harlequins director of rugby Conor O'Shea hopes his side will be able to fulfil their potential next season.

The 2012 Premiership champions were beaten in the play-off semi-finals last season, but won the LV= Cup.

"We'll have no grand talk about what we are going to do this year," O'Shea told BBC London 94.9. "We are just going to focus on being the best we can be.

"We want to keep up there competing. Our team can become a lot better than it was last year," he added.

"We were pretty good last year and won another trophy to make it three in three years. But there is a desire to be the best we can be.

"Clermont Auvergne showed you can be the best team in Europe but it doesn't mean you win things. It is hard to win things."

Quins, who finished third in the table last season, will begin the new campaign against Wasps at Twickenham on 7 September.

"We are looking forward to this season immensely and I think it will be really competitive for us," said O'Shea.

"When you get the fixture list, it brings everything into more perspective and it is on the horizon now.

"We hope we can get up in the top four again and see where it takes us."

Quins have lost forwards Olly Kohn and Will Skinner to retirement but, having bolstered their squad with the signing of second row Nick Kennedy, O'Shea believes that they have the quality to challenge for silverware.

"We're very happy we've kept the squad together," he said. "Competition for places is going to be huge.

"We've got a lot of young talent with the ones who won the LV= Cup last year, who will be pushing their older brethren.

"You look through the squad and we are comfortable where we are. Hopefully we will bring the Harlequins style to the pitch and that will create opportunities.

"That success is down to hard work. If the players work hard and bring their game on the pitch, we'll be all right."