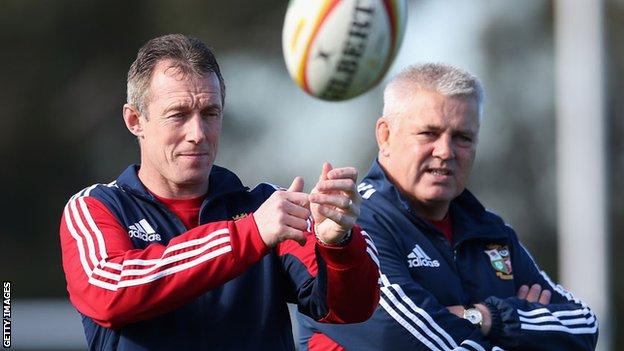 Rob Howley believes all four home nations will reap the benefits of the British and Irish Lions' Test series win over Australia.

Wales attack coach Howley was part of the backroom team as the Lions triumphed 2-1 over the Wallabies.

And he thinks the 41-16 third Test win will help remove the mystique of southern hemisphere rugby.

"The manner of the win on Saturday - 41 points and scoring four tries to one - just shows we can do it," Howley said.

The Lions started the deciding Test match with 10 Welsh players; a selection that drew criticism not just because of the mission of Brian O'Driscoll, but because Wales had suffered eight successive defeats against Australia, including four in 2012.

Asked whether the win would help Wales conquer any psychological issues over playing the Wallabies, Howley - who coached Wales in all four of the narrow defeats in 2012 - said the win had wider implications.

"I've got no doubt, not only from a Welsh perspective, but all the players from England, Scotland and Ireland when they take on the southern hemisphere guys again they can go there knowing that they have beaten them," he added.

"The magnitude of [the fact that] we've beaten them over the past three weeks having been there so many times and been so close and yet so far away.

"And the atmosphere at the stadium was priceless."

Howley toured South Africa with the Lions in 1997, but missed the Test series which the Lions won 2-1 because of injury.

He was also a tourist the last time the Lions faced Australia in 2001, but missed the 29-23 deciding Test defeat.

The 59-times capped former Wales scrum-half said the players could be proud of "making history" in Sydney last Saturday.

"It's just been an incredible journey a lot of hard work has gone into it and the last four days have been pretty special," he said.

"That performance on Saturday evening, and the atmosphere, the players will never forget that for the rest of their lives.

"They've created history and it just shows how hard it is to win Lions series.

"It hadn't happened for 16 years and we've had a fairly high proportion of Welsh players and that makes it even sort of better."